Scientists at the Howard Hughes Medical Institute’s Janelia Research Campus and University of California, Berkeley have developed a powerful new tool for neuroscientists—a viral vector called rAAV2-retro, which efficiently enters and travels through the long neuronal projections that connect different regions of the brain. Genetically-encoded tools for labeling cells or monitoring or manipulating their activity can be packaged inside the virus and delivered to groups of neurons that signal to a specific part of the brain, creating new opportunities to study large-scale neural networks. 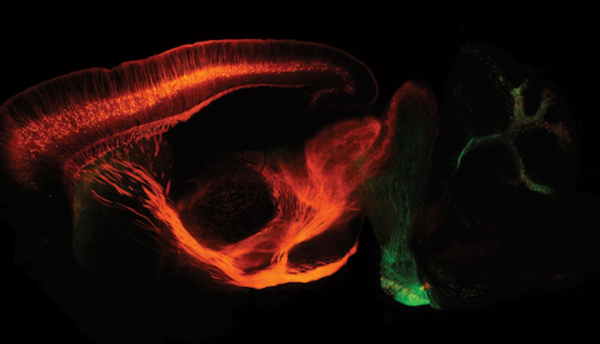 Chemical dyes have long been used to trace neuronal projections. However, a viral vector that is transported to neuronal cell bodies as efficiently as dyes carries a distinct advantage: it delivers a genetic payload to the cells that it infects. “We have performed rigorous analysis to establish that this tool is more effective than anything available, and, based on feedback from our colleagues in neuroscience, we believe that it will expand the scope of neural circuit research,” says Janelia group leader Alla Karpova, who led the large-scale effort to develop and test rAAV2-retro. Eventually, Karpova and her colleagues say, rAAV2-retro might also enable efficient delivery of gene therapies to cells affected by neurodegenerative disease. Karpova and her colleagues reported on rAAV2-retro on October 6, 2016, in the journal Neuron.

Karpova says the new tool helps solve a frustration many neuroscientists experience as they try to unravel how neural circuits process and relay information across the brain. The projection neurons that connect distant parts of the brain are intimately intermingled with one another, and it is difficult to manipulate specific groups of cells selectively to study their function. “It’s pretty clear that projection neurons are a critical component of large-scale networks. But understanding their specific role is hard. It requires being able to distinguish and genetically access different subpopulations,” Karpova says.

To make those kinds of studies possible, Karpova and her collaborators set out to engineer a virus that would be efficient at retrograde transport: entering a neuron’s axon—the long, thin projection that sends signals to other cells—and traveling all the way back to the cell body, where signals originate.

With the support of the Visiting Scientist Program, Janelia scientists partnered with David Schaffer’s team at the University of California, Berkeley, to begin their search. Schaffer had previously developed a diverse collection of variants of adeno-associated viruses (rAAVs), non-toxic viruses that are widely used in neuroscience research. Naturally occurring adeno-associated viruses are tremendously variable, and can infect different types of cells depending on the precise structure of their outer protein shell, or capsid. The researchers suspected that the right alterations to the capsid might give an adeno-associated virus just the properties they were looking for.

Postdoctoral researcher Gowan Tervo led the effort to find a virus that exhibited efficient retrograde transport in the brains of mice. Together with members of the Dudman and Hantman labs, he devised a screen that would test viruses’ ability to travel through two different sets of neurons that traverse long distances. After injecting the full set of viral variants into the sites where those cells send their signals, Tervo and his colleagues waited three weeks, giving the virus time to spread. Then they collected any viruses that had reached the distant part of the brain where the neurons’ signals originated.

With the help of Schaffer’s team, an enriched viral pool was then generated, and injected into the same sites in the brain, beginning the selection process again. The procedure was repeated several times, each time generating viral variants better suited for the task at hand.

At the end of that process, the team had several viral vectors that were very good at traveling through the particular neurons he had used in his screen. But to be the type of versatile tool the researchers were looking for, a virus needed to perform equally well in neurons elsewhere in the brain. Together, the team selected 15 contenders and with the support of Janelia’s core facilities, examined each variant’s ability to trace many different neuronal paths through the brain. When they were used to deliver fluorescent proteins to neurons, the viral vectors that worked best generated clear maps of cells’ courses through the brain, showing groups of labeled cells converging on the site where the virus had been injected.

After this massive effort, the team selected a single virus that excelled in their tests, efficiently diffusing through projection neurons in many different parts of the brain. That vector also successfully delivered a genetically-encoded sensor of neural activity to target cells, causing those cells to light up when they fired.

Still, Tervo says, additional testing was needed. Together with Sarada Viswanathan, a postdoctoral researcher in Loren Looger’s laboratory, he developed sensitive assays to measure the performance of the virus, and after spending more than a year comparing rAAV2-retro to alternative tracers and viral vectors, the team concluded that it is the best tool available for selectively accessing groups of neurons based on their projection patterns. “Now we’re in the position where we can confidently recommend this for the vast majority of circuits,” Tervo says.

Karpova and her colleagues are making rAAV2-retro freely available to the neuroscience community, and hope it will be used for a wide range of scientific applications. “We altered the capsid of the virus. The payload that you put into it is up to you,” Tervo says.