Now We Know How the Thalamus is Organized

Janelia’s ThalamoSeq Project Team uncovers new details about the organization of the thalamus, a central control center in the brain.

Slowly, the thalamus is being uncloaked.

The brain structure sits just above the brain stem and acts as a central switchboard, directing sensory and motor signals to the cortex. Different regions of the thalamus direct traffic to different areas, like the visual cortex or the auditory cortex.

Now, a Project Team at the Howard Hughes Medical Institute’s Janelia Research Campus illuminates this crucial structure’s organization in new detail. An analysis of RNA from neurons in the thalamus suggests that those specialized regions of the thalamus are built in much the same way as one another, the team reports September 16, 2019, in the journal Nature Neuroscience. This hints at surprising parallels in how different types of information are transferred around the brain. 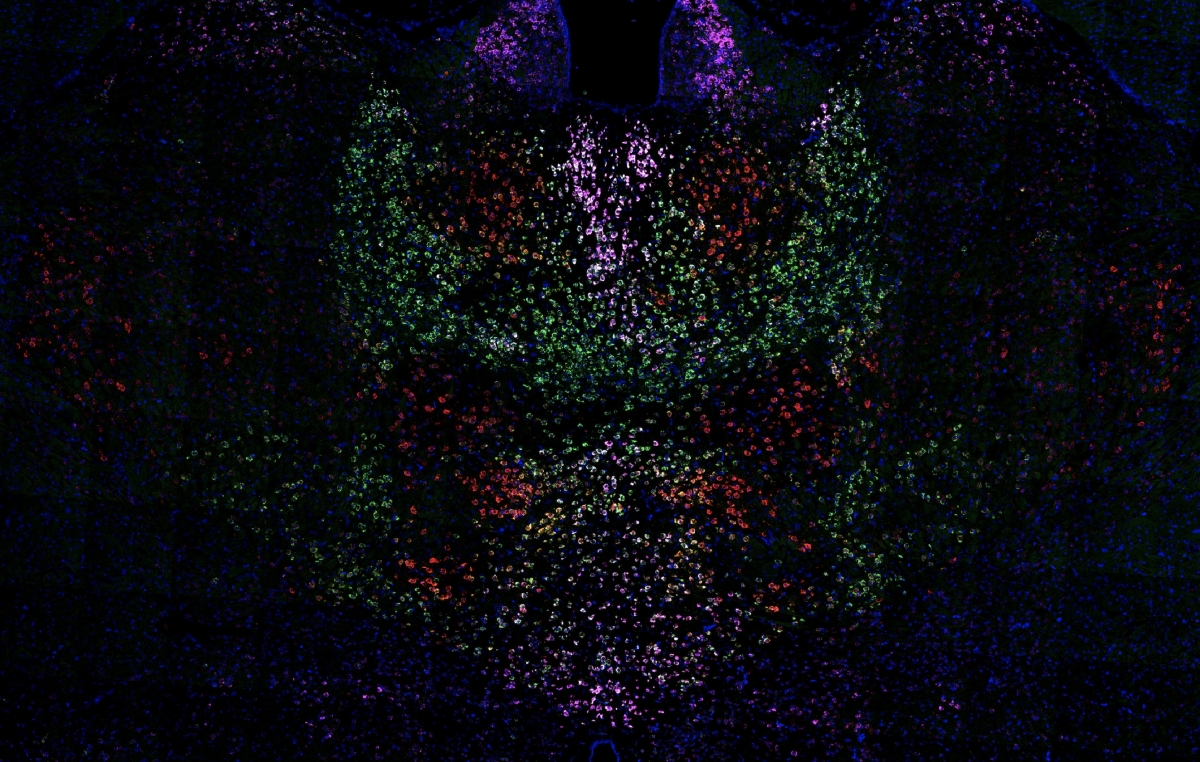 Based on measuring RNA, “there were three main types of thalamic pathways that repeated across essentially every system,” says study coauthor James Phillips, a graduate student at Janelia.

Many structures in the brain send signals through the thalamus. Scientists at Janelia and beyond were studying some of those parts individually, but how those areas communicated with each other via the thalamus was largely a mystery. There just weren’t good tools to study specific subsets of cells in the thalamus, says Adam Hantman, a Janelia group leader who helped direct the project. And without the ability to isolate cells receiving messages from certain brain areas, it was hard to know exactly how signals were being relayed.

This project, ThalamoSeq, aimed to make the thalamus easier to study and understand. It built on techniques honed during a previous Janelia team project, which categorized neurons in mouse and fly brains by analyzing RNA from individual cells. ThalamoSeq adapted those techniques to take a deeper dive into one key brain structure, generating an online resource far more complete than one lab could typically accomplish alone.

Now, “we’ve redefined the cell types of the thalamus based on the pattern of gene expression,” says study coauthor Anton Schulmann, also at Janelia. It’s a more holistic and detailed way of looking at brain cells than simply looking at where they go or what kind of signals they send, and one that opens doors for future research into how the brain is built and organized.

By analyzing the way RNA transcripts varied between cells in the thalamus, the researchers identified three primary profiles of cells. That spectrum of cell types repeated itself over many regions of the thalamus responsible for transmitting different signals – each area contained the same subsets of cell types. That is, the part of the thalamus that communicates with the visual cortex has the same types of cells as the part that communicates with the auditory cortex, the motor cortex, or other brain areas.

“I think the most attractive and intriguing part of this is that for a long time, there’s been a suggestion that the cortex, the seat of cognition, is organized in a similar way across its structure. But what this suggests is, this is actually true right at the core of the brain,” says Phillips. “By understanding the thalamus’s organization, we can get a great deal of information about how the rest of the brain is organized.”

But notably, the boundaries between those cell types were somewhat blurred – not everything fell into a clear category. “I think that’s an important lesson that might be true for other parts of the brain,” says Hantman. “We love to split things into types, but these intermediates are interesting.” And without looking at the thalamus in this much detail, he says, that nuance might have gone unnoticed.