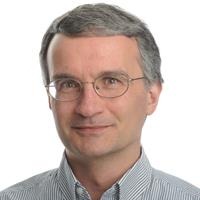 Don Olbris earned his Ph.D. in statistical physics at the University of Rochester, developing theoretical and computational models in the areas of "soft" condensed matter and macromolecular physics.  As a postdoc at Brandeis University, he first worked on developing theoretical models for actin polymerization based cell motility. Later, he moved to a structural biology lab, where he wrote software in support of a single-particle EM group, including a physics-based simulation of image formation in the electron microscope, workflow and data transformation scripts, and a software package for single-particle image analysis.  At Janelia, Don has worked on projects for several groups, ranging from large-scale data analysis to microscope control software to interactive user applications.  Most notably, he developed the "Raveler" proofreading application used by the FlyEM project in their pursuit of the fly brain connectome. He also contributed to the development of the "Large Volume Viewer" for the MouseLight project.