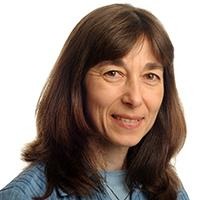 I joined Janelia in late 2012 to manage the newly formed Technical Resources group. I am intrigued by the concept of creating a support team that can react flexibly to the changing needs of the Janelia research community, while simultaneously providing continuity in available services and a measure of stability for staff. Tech Resources has a symbiotic relationship with team projects, many members being assigned to one project over its entire lifetime. Currently, most staff is assigned to FlyLight, and I am working closely with Oz Malkesman, the FlyLight project manager, to help this large team project run smoothly. Other team members were previously part of the Fly Olympiad led by Wyatt Korff. They now assist smaller team projects and laboratories utilizing assays that were developed in the Fly Olympiad or helping to establish new assays.

My work experiences in three different countries and exposure to various research settings benefit my current role. I started out studying biology and chemistry in Hamburg, Germany, specializing later in biochemistry and cell biology. My scientific journey brought me from Hamburg, where I was participated in the discovery of the LDL-receptor-related protein 1 (LRP1) while pursuing my PhD in Ulrike Beisiegel’s lab, to the Johns Hopkins University in Baltimore, where I established an in vitro model for polarized hepatocytes as a postdoctoral fellow in Ann Hubbard’s lab. Both projects were highly collaborative in nature, and these experiences set the stage for many more collaborations I would embark on in the following years.

I spent several years at the University of Cambridge (UK), initially with Paul Luzio in the Department of Clinical Biochemistry and later at the newly established Cambridge Institute for Medical Research (CIMR). This institute was created to further the partnership between basic science and medical departments to accelerate medically relevant research. I experienced first hand how the organization of an institute, fostering an open communication structure by design, can transform the quality and speed of science. This is one of the reasons why I feel at home at Janelia since similar principles are written in capital letters at Janelia.

In my research I pursued projects that centered on the intracellular trafficking of membrane proteins in polarized epithelial cells, in particular along lysosomal and apical pathways, using various in vitro and in vivo model systems. At the CIMR, I established and managed the light microscopy facility for about 3 years alongside my research. I also set up a small fly lab to promote the use of Drosophila models and interactions with the lively Drosophila community in Cambridge. In 2006, I returned to the US to continue my research at the Uniformed Services University in Bethesda.

My scientific contributions include the discovery of a novel group of membrane proteins that appear to function at the crossroads of membrane traffic and cell signaling, namely endolyn/CD164 and related sialomucins. Interfering with endolyn function inhibits kidney development in rat organ culture and pronephros function in zebrafish. Long-term memory in Drosophila vsg mutants deficient in the homologous protein Visgun is reduced by about 50%. To this date the cellular mechanism underlying these phenotypes in epithelial tissues and in brain are little understood and remain fascinating to explore.

Senior Research Associate at the University of Cambridge, UK