Isotropic high-resolution imaging of large volumes provides unprecedented opportunities to advance connectomics and cell biology research. With leading-edge innovations and tremendous integration effort [Xu et al. 2017; Xu et al. 2020; Xu et al. 2020], we have developed technologies to overcome the limitations of conventional systems, thereby expanding the image volume of FIB-SEM by more than four orders of magnitude from 103 µm3 to 3 x 107 µm3 while maintaining an isotropic resolution of 8 x 8 x 8 nm3 voxels. Primarily limited by time, the maximum volume can be greatly extended. These expanded volumes open a vast new regime in scientific learning, where nano-scale resolution coupled with meso and even macro scale volumes is critical.  The largest connectome in the world has been generated through our enhanced FIB-SEM platform [Xu et al. 2020], where the superior z resolution empowers automated tracing of neurites and reduces the time-consuming human proofreading effort. Increased resolution further improves the interpretation of otherwise ambiguous details. Nearly all organelles can be resolved and classified with whole cell imaging at 4 nm voxel resolution. We have routinely imaged entire mammalian cells at this resolution to study the close contacts among various organelles. Furthermore, new CLEM applications  [videos] enabled at the whole-cell level, can readily probe cell biology questions that are otherwise intractable. 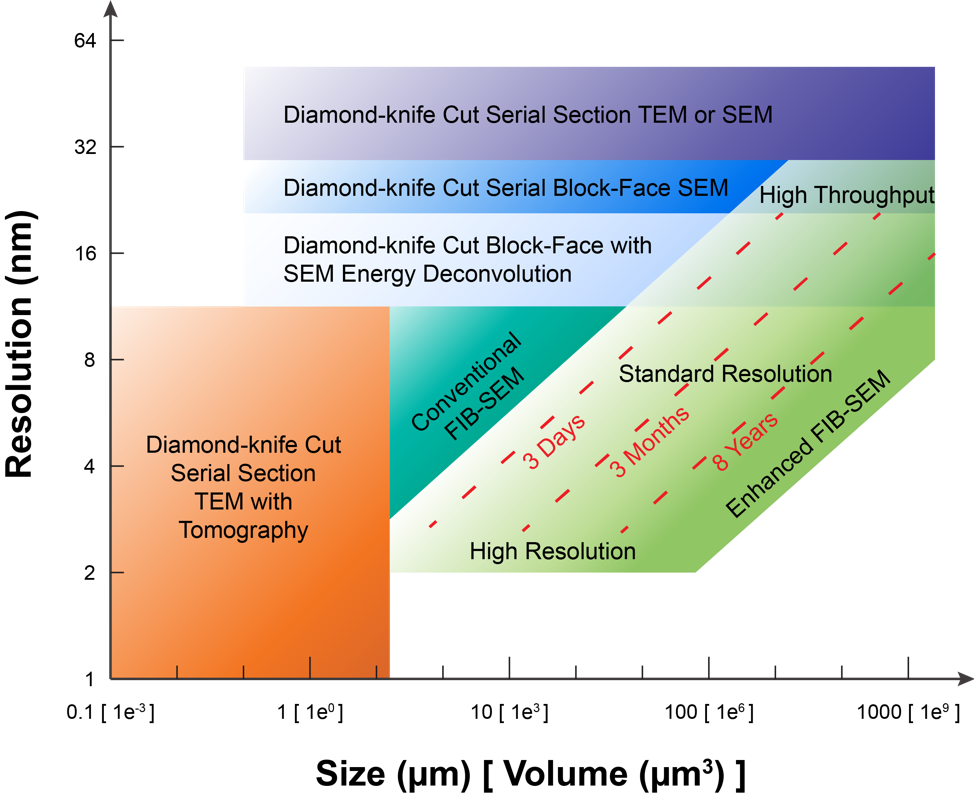 Furthermore, image volume can be traded off for even finer resolution, for example a continuous volume of ~ (50 µm)3 at 4x4x4 nm voxel resolution can be easily accommodated. The greater ease of automated processing of such isotropic voxel data can generate ground truth of the smallest organelles for machine learning in connectomics and providing important insights into cell biology thus reducing the large human proof reading effort. A few exemplary data sets of drosophila brain, neural tissue, and chlamydomonas can be seen from the movies below. The extended regime of fine resolution in all three dimensions combined with sufficiently large volume will empower researchers with new techniques to accelerate discoveries.
Drosophila optic lobe 4x4x4 nm voxel resolution
janelia7_blocks-janelia7_block_right_hand_rail | block

A connectome of a learning and memory center in the adult Drosophila brain.