In the Lab with Janelia Undergraduate Scholar Virginia Rutten

How does a zebrafish learn to navigate a water maze? Virginia Rutten, an undergraduate scholar in the Ahrens lab, would love to tell you. For the second summer in a row, Virginia is working with Misha Ahrens and his group to find out how these animals learn to recognize their environment.

Virginia first came to Janelia Research Campus the summer after her third year at the University of Cambridge. As part of the application process, potential Janelia Undergraduate Scholars are asked to identify a Janelia scientist with whom they would like to work. Virginia was immediately attracted to the work being done in the Ahrens lab after reading about how the group is able, for the first time, to image the entire brain of a fictively behaving zebrafish, at single cell resolution thanks to the technology they developed with the Keller lab.

“If you want to understand a system, you first need a method to observe it,” she explained. “Some research groups study spikes, high-resolution activity but only in a few cells, while at the other extreme, others study whole brain activity but at a very coarse resolution, with fMRI for instance—the Ahrens lab bridges the gap by imaging the whole brain at high resolution.”

Her first summer on campus, Virginia immediately got to work. “It was incredible. It was my first day, I was watching the fish and became intrigued by how they move when they see new objects. And that very same night, I was already coding until 1:00 a.m. with help from Misha to try to quantify the behavior I had seen. Getting an idea and jumping on it is really the spirit of Janelia. Of course, you think carefully about the experiments and get input and mentorship from others, but if you have an idea, you can just go for it,” she said.

Virginia worked with Janelia’s Instrument Design and Fabrication support team to design and build her experimental setups used to observe and collect data on how zebrafish learn to navigate. This year, as a returning scholar, she’s using light sheet microscopy to record whole brain neural activity to find out which circuits underlie the changes in behavior she has observed.

“I’ve had the chance to go to a few other programs, but what really stands out [about Janelia] is the freedom that you’re given to really explore and express yourself in your research,” she said. “You drive your own project. You set your own limits. At another place, you might be given someone’s PhD work—it might be a bit repetitive. Here I am learning new methods, how to do experiments, how to test a hypothesis. It’s always in the context of the lab and with assistance of course, but you’re not doing someone else’s work—you’re doing your own work.”

The research Virginia is doing at Janelia is not done. In the fall, she’ll begin a joint PhD between the Gatsby Computational Neuroscience Unit at University College London and the Ahrens lab at Janelia. 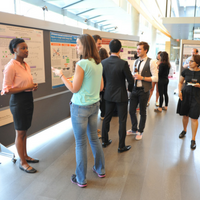