Our biologists, computational scientists, and tool-builders drive science forward by collaborating on a small number of important and highly challenging problems.  As we plan for the future, we’re making several changes designed to maximize Janelia’s impact over time:

Because Janelia seeks to catalyze new science, we need a way to regularly renew our research focus. Going forward, we plan to operate on 15-year cycles. We will develop a given research area for roughly 15 years to gain traction and attract outside interest, at which point we’ll cycle to a new area of focus. This approach enables Janelia to stay at the frontier of science, advancing 1-3 research areas at any point in time. Our first research area will leverage and transform our current program on neural circuits and behavior, allowing us to pursue one of the biggest questions in brain science while smoothly transitioning to our new model of planned turnover.

How does the brain enable cognition? We are developing an integrated program in which tool-builders, biologists, and theorists collaborate to clear the technical, conceptual, and computational hurdles that have kept the most intriguing aspects of cognition beyond the purview of mechanistic investigation. The program will establish tight links across our existing genetic model systems —flies, fish, and rodents— and exploit their complementary strengths. We aim to make the fly the benchmark for reductionist explanations of neural processes underlying complex behavior, leveraging conceptual research by mammalian neuroscientists. The fly has strong potential as a model for rapid mechanistic insights, due to its small brain size, the likelihood of obtaining a complete wiring diagram of its brain, and increasingly powerful methods for measuring and manipulating genetically defined populations of cells in behaving animals. We expect this research to reveal strategies for better understanding the more sophisticated neural and behavioral features of vertebrates. In turn, we expect our vertebrate research to expose complex computational mechanisms, some of which we can study at a detailed level in the fly.

The ideal Janelia tool-builder is a leader in his or her field, deeply interested in creating powerful tools to resolve scientific questions. These experts collaborate closely with technically adventurous biologists at Janelia, ensuring that we’re developing the right tools for the task.  To date, our labs, project teams and shared resources have built microscopes, dyes, sensors, and computational tools that scientists worldwide now use. This work, and the scientific interactions that emerge from it, remain at the heart of Janelia.

We’re excited for what’s to come. 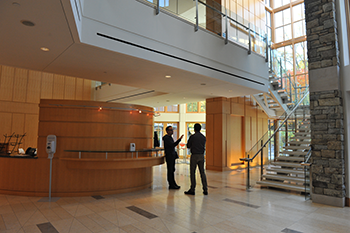 Janelia is part of the Howard Hughes Medical Institute. See how HHMI is committed to experimenting with new approaches to achieve progress and sharing what we learn along the way.