The protein works by forming droplets that concentrate far-apart genes involved in the same processes.

To coax cells into multiplying, one protein pulls some strings.

A protein that helps coordinate cell proliferation can reorganize the way genes are packaged by clustering into tiny droplets. Those droplets draw together far-flung genes that control proliferation, like scrunching up a necklace of DNA to create tangled, dense knots, researchers report December 2, 2019, in Nature Cell Biology. Then, those genes can be regulated in sync.

This protein, YAP, is the master key to a collection of hundreds of genes involved in cell division, determining when they’re turned on and off. But because these genes are sprinkled widely throughout the genome, controlling them in a synchronized way is a logistical challenge. Now, researchers have identified one way that YAP might bring many genes together to direct cell replication. 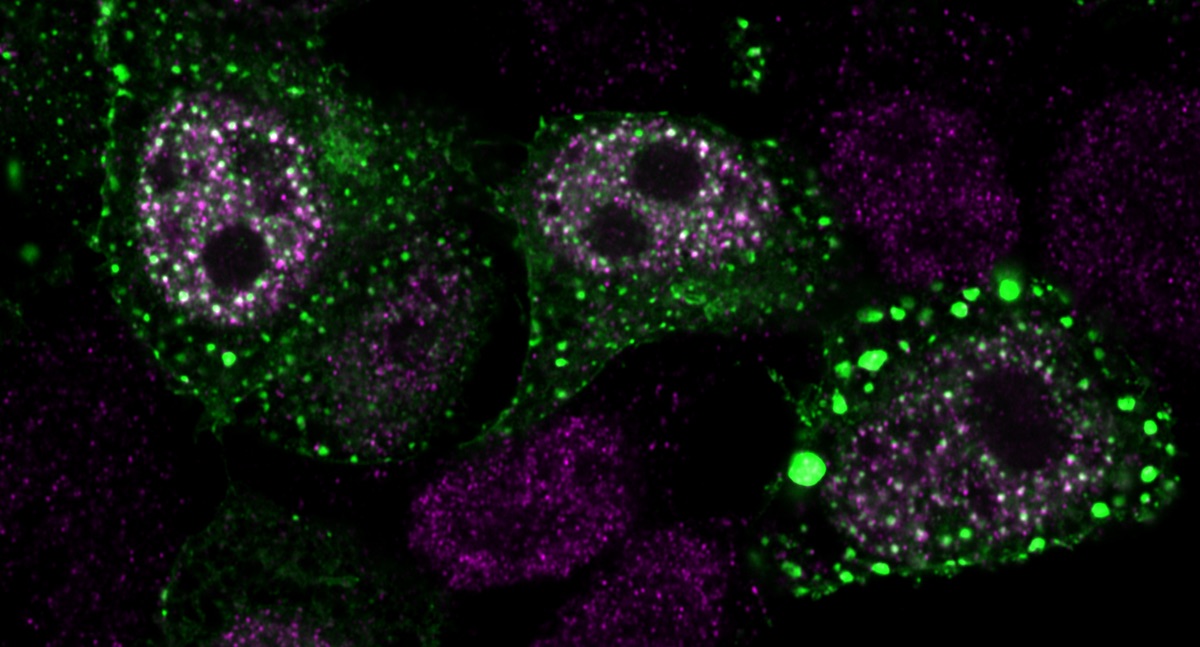 Normally, YAP is distributed throughout the cell. But changes in the cell’s environment can change the amount of free space inside the cell. If water leaves the cell, for instance, the cell shrinks, and molecules inside it become packed closer together. That crowding triggers YAP to cluster into phase condensates – small droplets that don’t mix with what’s around them, like oil in water. Some of these droplets are formed in the nucleus, where the cell stores its DNA, Lippincott-Schwartz and colleagues showed.

Then, to study what was happening inside these droplets, they used a new kind of super-resolution microscopy approach developed by Janelia group leader James Liu, which can monitor the way genes are packaged inside the cell.

YAP appears to change the way the cell packages its DNA, the team found. Inside these condensates, YAP comingles with genes related to proliferation. “YAP puts them all in one place – it’s reorganizing the genome,” says Lippincott-Schwartz. “It’s the first time we’ve seen this.” And YAP is selective: irrelevant genes aren’t included in the droplets.

If strands of DNA are a necklace, each gene a bead, YAP appears to scrunch this piece of jewelry up. Genes related to cell replication, perhaps strung far apart on the necklace, come together in concentrated tangles. Once all are in the same place, they can be coordinated with ease.

In cancer cells, YAP is overactive – it turns on these cell proliferation pathways when it shouldn’t, making cells replicate out of control. But because of its lack of structure, YAP is a particularly hard protein to target with drugs, says study lead author Danfeng Cai, also at Janelia. Instead, preventing it from forming the droplets that seem to set off cell proliferation might be one way to halt its effects.

“In cancer cells, we don’t quite know what’s triggering droplet formation,” Lippincott-Schwartz says. YAP seems to respond to crowding in the cell caused by water loss, but what sets that in motion isn’t yet clear. Now, the team is collaborating with researchers at the National Cancer Institute to study YAP in cells from kidney cancer patients.