A new class of Janelia Fluor dyes is available for free to scientists.

The latest Janelia Fluor dyes are brighter than ever.

Fluorescent dyes developed at HHMI’s Janelia Research Campus have been powerful tools for biological imaging for more than a decade. Now, a key chemical modification to the dye structure prevents the fluorescent molecules from losing steam as they’re exposed to light, making the dyes fluoresce more brightly and for longer. 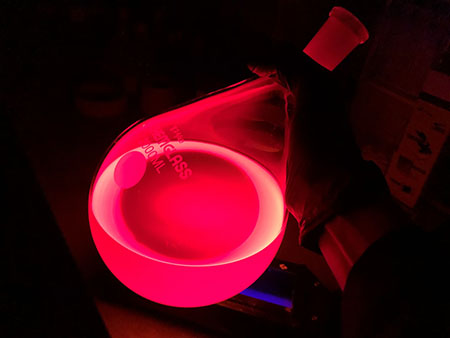 The new “JFX” dyes are the best tools for live-cell imaging that the team has created to date, says senior group leader Luke Lavis, head of Molecular Tools and Imaging at Janelia. The dyes are already being used by biologists in labs at Janelia and beyond. And in continued support of open science, Lavis’s group is making the tools available free of charge. They describe the work in a paper published April 23 in the new open access journal JACS Au.

The dyes are particularly useful for studying proteins that occur at relatively low levels in a cell, and for tracking them over time, says Francesca Bottanelli, a biologist at the Free University in Berlin who is already using the JFX dyes in her research on the movement of cargo in and out of cells. “A brighter dye allows us to see what we want to see. And we want to be able to follow structures for a longer amount of time, so a dye that bleaches less quickly is good for us.”

The improvement comes from the addition of a modified form of hydrogen to the dye molecule — a “heavy” version called deuterium that has a neutron alongside the lone proton found in regular hydrogen.

Researchers knew from past experiments that mixing dyes into “heavy” water (made with deuterium instead of ordinary hydrogen atoms) made them fluoresce more brightly than they did in regular water. But past attempts to add deuterium directly to the dye molecules themselves hadn’t changed the performance much. This time, Lavis’s team, led by senior scientist Jon Grimm, took a new approach: Adding deuterium to a more peripheral part of the dye molecule, in a spot that hadn’t been tried before. By adding extra neutrons to hydrogen atoms in one part of the dye molecule, they saw the increased brightness they hoped for. The deuterium also inhibits unwanted photochemical processes that decrease the dye’s brightness and lead to photobleaching, Lavis says.