Imaging technology developed at HHMI’s Janelia Research Campus is giving scientists the best picture yet of how cancer cells fend off the immune system.

Researchers from the biotechnology company Genentech, a member of the Roche group, used Janelia’s high-powered electron microscopes to snap 3D pictures of killer T cells attacking cancer cells. The overlay of additional 3D fluorescent images reveals how cancer cells may recruit a protein to repair holes poked in their membranes – a molecular fix-it job that keeps the cancer cells alive.

The high-resolution images let researchers create detailed maps of cancer cells’ membranes during the repair process. The new research and images were recently published in Science and featured on the journal’s cover. The striking cover image depicts a killer T cell at the precise moment it attempts to destroy a cancer cell.

“It is the best picture of what exactly is going on when the T cell is killing the cancer cell,” says Alex Ritter, a postdoc at Genentech and lead author of the new paper.

The work could help scientists develop better immunotherapies for cancer by creating medicines that prevent cancer cells from repairing themselves.

It also underscores how the high-powered microscope technology, called focused ion beam scanning electron microscopy, or FIB-SEM, could help answer a wide range of biological questions, says Harald Hess, a coauthor of the new study and a senior group leader at Janelia. Hess and C. Shan Xu, a former senior scientist at Janelia, developed FIB-SEM into a tool for biological imaging and have optimized it for over a decade.

“Alex had the perfect story for this tool and he really made it shine,” says Aubrey Weigel, a coauthor of the study and the Janelia project scientist leading the CellMap project team, which examines the 3D structures of cells in tissues at unprecedented resolution. What’s more, she says, the data captured at Janelia could aid other cancer researchers examining interactions between immune cells and cancer cells. 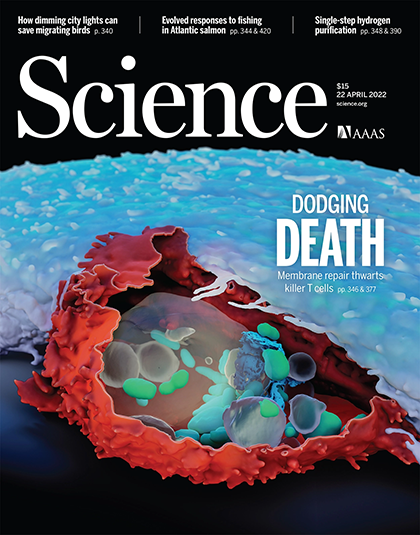 The team’s results are all freely available on Janelia’s OpenOrganelle, an interactive portal of high-resolution datasets acquired with FIB-SEM technology.  Weigel, who led the OpenOrganelle effort as part of the COSEM (Cell Organelle Segmentation in Electron Microscopy) project team says that the new work “now provides a really cool, open-sourced resource that other folks can go and look at.”

But cancer cells don’t always let this happen. They’ve evolved to repair the holes the T cells produce. Ritter’s team at Genentech sought to find out how. They turned to scientists at Janelia to capture images of this mending process.

Ritter and his colleagues had imaged the live cells before, but they needed instruments with much higher resolution to see exactly what was going on. FIB-SEM fit the bill, allowing scientists to get a high-resolution 3D image of the whole cell.

First, Gleb Shtengel, a senior scientist in Hess’s lab, imaged the cells using visible light to home in on the interaction between the T cell and cancer cell. Then, he selected cells in the thick of the action for higher-resolution imaging with FIB-SEM. The electron microscope images nanometer-thick layers of cells and then a computer stitches the layers together to create 3D images.

The researchers used the images to build a detailed topographic map of the cells’ membranes. With this map, Ritter’s team could pinpoint the specific protein the cancer cell uses to repair holes. When the scientists blocked the repair process, the T cells were more efficient at killing their targets – a finding that could be used to improve existing immunotherapies.

Hess hopes the new study spurs other researchers to use FIB-SEM for answering other biological questions. FIB-SEM was originally developed for materials science applications, but in the past decade scientists have started routinely using the technique for biological imaging. Janelia scientists perfected the technique during the construction of the fly brain connectome and are now ready to expand into other areas.

Now, Hess points out, scientists have the computing capacity to handle terabytes of imaging data, machine-learning programs to analyze the data, as well as new biological tools for labeling the images. All of these can enable greater use of FIB-SEM technology, Hess says.

“We are in a total revolution. A lot of things are coming together in the world right now,” he says. “Not only is there the science coming out about the T cell attacking the cancer cell, but it really inspires people to think of other directions where this kind of technology could be useful and to push the interest and development of how to analyze this kind of data.”