A new two-photon microscope captures videos of the brain faster than ever, revealing voltage changes and neurotransmitter release.

The trick lies not in bending the laws of physics, but in using knowledge about a sample to compress the same information into fewer measurements. Scientists at the Howard Hughes Medical Institute’s Janelia Research Campus have used the new microscope to watch patterns of neurotransmitter release onto mouse neurons, they report July 29 in Nature Methods. Until now, it’s been impossible to capture these millisecond-timescale patterns in the brains of living animals.

Scientists use two-photon imaging to peer inside opaque samples – like living brains – that are impenetrable with regular light microscopy. These microscopes use a laser to excite fluorescent molecules and then measure the light emitted. In classic two-photon microscopy, each measurement takes a few nanoseconds; making a video requires taking measurements for every pixel in the image in every frame.

That, in theory, limits how fast one can capture an image, says study lead author Kaspar Podgorski, a fellow at Janelia. “You’d think that’d be a fundamental limit –­ the number of pixels multiplied by the minimum time per pixel,” he says. “But we’ve broken this limit by compressing the measurements.” Previously, that kind of speed could only be achieved over tiny areas.

The new tool – Scanned Line Angular Projection microscopy, or SLAP – makes the time-consuming data-collection part more efficient in a few ways. It compresses multiple pixels into one measurement and scans only pixels in areas of interest, thanks to a device that can control which parts of the image are illuminated. A high-resolution picture of the sample, captured before the two-photon imaging begins, guides the scope and allows scientists to decompress the data to create detailed videos. 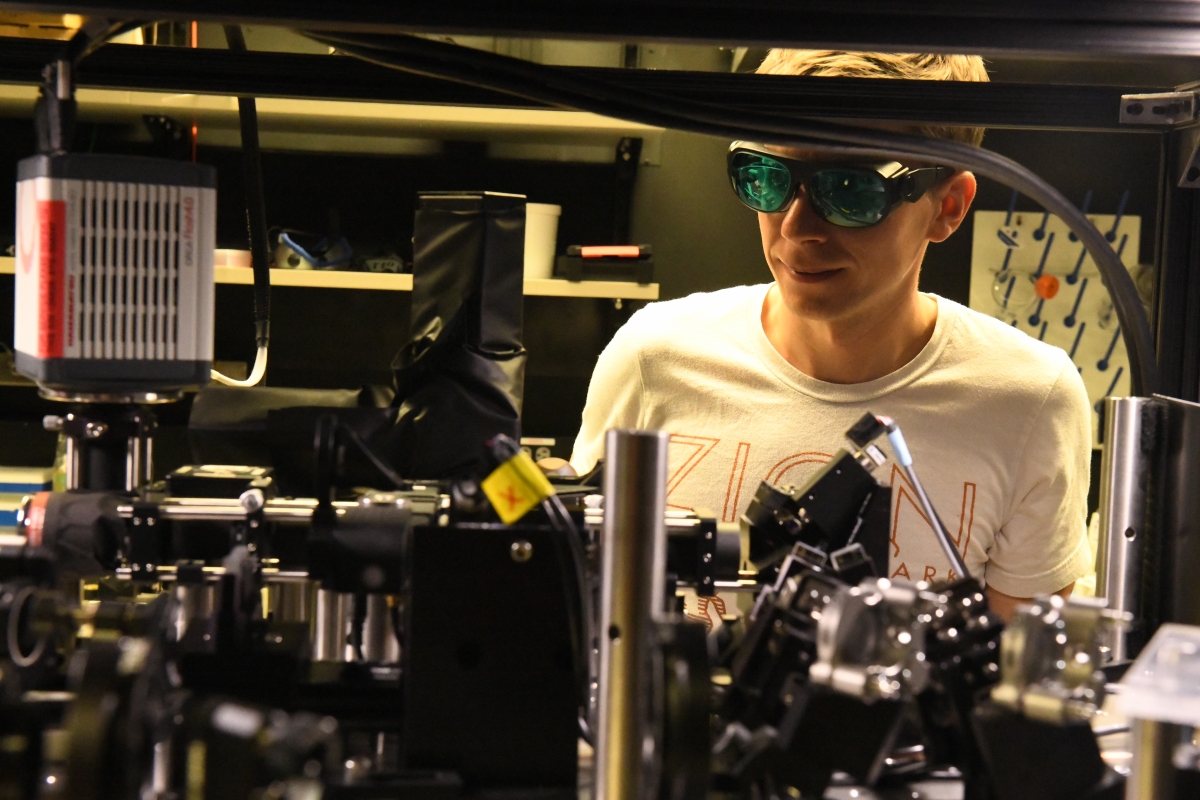 Much like a CT scanner, which builds up an image by scanning a patient from different angles, SLAP sweeps a beam of light across a sample along four different planes. Instead of recording each pixel in the beam’s path as an individual data point, the scope compresses the points in that line together into one number. Then, computer programs unscramble the lines of pixels to get data for every point in the sample – sort of like solving a giant Sudoku puzzle. 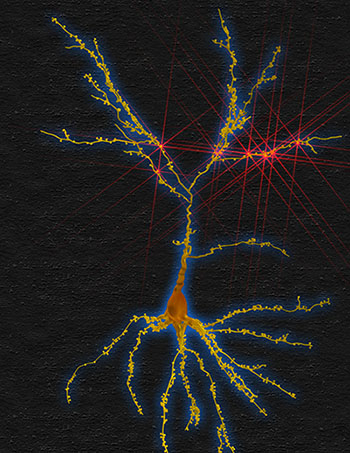 In the time it takes SLAP to scan the whole sample, a traditional scope going pixel-by-pixel would cover just a small fraction of an image. This speed allowed Podgorski’s team to watch in detail how glutamate, an important neurotransmitter, is released onto different parts of mouse neurons. In the mouse visual cortex, for example, they identified regions on neurons’ dendrites where many synapses seem to be active at the same time. And they tracked neural activity patterns migrating across the mouse’s cortex as an object moved across its visual field.

Podgorski’s ultimate goal is to image all of the signals coming into a single neuron, to understand how neurons transform incoming signals into outgoing signals. This current scope is “only a step along the way – but we’re already building a second generation. Once we have that, we won’t be limited by the microscope anymore,” he says.

His team is upgrading the scope’s scanners to increase its speed. They’re also seeking ways to track other neurotransmitters so they can fully tap into the symphony of neural communication.