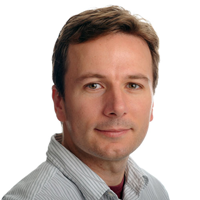 Stephen studied Neuroscience at Unviersity College London, he then moved to Holger Krapp’s Cambridge University lab for his PhD.  In the lab, he studied how fly motor neurons process their visual and mechanosensory inputs; this led to an interest in how motor and sensory systems influence each other.  He then moved to the California Institute of Technology where, in Gilles Laurent’s lab, he continued to focus on the interaction between sensory and motor systems, studying the interplay between active sampling behavior and neural coding in locust olfactory system.  He then moved to Janelia as a Fellow where he is combining electrophysiology with the genetic tools available in Drosophila to study how fly motor systems decode the output of the visual system.

Sensory systems encode information about the external world, and motor systems generate movements, but how do the two systems communicate to generate sensory-guided behavior?  I record the electrical activity from fly motor neurons during visual stimulation to determine how the motor neurons decode their visual system inputs and generate appropriate behavior.  By working in the fly I can draw on the strong Drosophila genetic toolkit that allows me to also manipulate the activity of specific neurons during my experiments.

Considerable scientific effort has gone into understanding how fly visual neurons respond to and encode sensory inputs.  Less is known about how the responses of these neurons are used to guide movements of the fly.  In the specific case of fly gaze-stabilization behavior, the relevant motor neurons drive muscles that move the head to keep the eyes level.  These motor neurons receive direct synaptic inputs from visual neurons.  The comparative simplicity of the circuit provides an exciting opportunity to study how motor neurons process their visual system inputs.  I perform patch clamp and extracellular recordings from these motor neurons while presenting visual stimuli to determine the algorithms that the motor neurons use to extract appropriate information from the visual system.  Studying these questions in Drosophila gives me access to the ever-improving repertoire of genetic tools that allow genetic manipulations to be targeted to specific single neuron types.  I use such techniques to manipulate upstream sensory neurons during my motor neuron recordings and behavioral experiments to determine the biological mechanisms that underlie the responses I see.

By studying this system I hope to not only understand how this part of the fly nervous system works, but also to uncover general principles applicable to understanding how the motor and sensory systems of all animals interact at the neural level to generate behavior.