Single-wavelength fluorescent reporters allow visualization of specific neurotransmitters with high spatial and temporal resolution. We report variants of intensity-based glutamate-sensing fluorescent reporter (iGluSnFR) that are functionally brighter; detect submicromolar to millimolar amounts of glutamate; and have blue, cyan, green, or yellow emission profiles. These variants could be imaged in vivo in cases where original iGluSnFR was too dim, resolved glutamate transients in dendritic spines and axonal boutons, and allowed imaging at kilohertz rates.

Marking functionally distinct neuronal ensembles with high spatiotemporal resolution is a key challenge in systems neuroscience. We recently introduced CaMPARI, an engineered fluorescent protein whose green-to-red photoconversion depends on simultaneous light exposure and elevated calcium, which enabled marking active neuronal populations with single-cell and subsecond resolution. However, CaMPARI (CaMPARI1) has several drawbacks, including background photoconversion in low calcium, slow kinetics and reduced fluorescence after chemical fixation. In this work, we develop CaMPARI2, an improved sensor with brighter green and red fluorescence, faster calcium unbinding kinetics and decreased photoconversion in low calcium conditions. We demonstrate the improved performance of CaMPARI2 in mammalian neurons and in vivo in larval zebrafish brain and mouse visual cortex. Additionally, we herein develop an immunohistochemical detection method for specific labeling of the photoconverted red form of CaMPARI. The anti-CaMPARI-red antibody provides strong labeling that is selective for photoconverted CaMPARI in activated neurons in rodent brain tissue.

The development of genetically encoded self-labeling protein tags such as the HaloTag and SNAP-tag has expanded the utility of chemical dyes in microscopy. Intracellular labeling using these systems requires small, cell-permeable dyes with high brightness and photostability. We recently discovered a general method to improve the properties of classic fluorophores by replacing N,N-dimethylamino groups with four-membered azetidine rings to create the "Janelia Fluor" dyes. Here, we describe the synthesis of the HaloTag and SNAP-tag ligands of Janelia Fluor 549 and Janelia Fluor 646 as well as standard labeling protocols for use in ensemble and single-molecule cellular imaging. 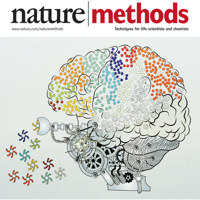 Pushing the frontier of fluorescence microscopy requires the design of enhanced fluorophores with finely tuned properties. We recently discovered that incorporation of four-membered azetidine rings into classic fluorophore structures elicits substantial increases in brightness and photostability, resulting in the Janelia Fluor (JF) series of dyes. We refined and extended this strategy, finding that incorporation of 3-substituted azetidine groups allows rational tuning of the spectral and chemical properties of rhodamine dyes with unprecedented precision. This strategy allowed us to establish principles for fine-tuning the properties of fluorophores and to develop a palette of new fluorescent and fluorogenic labels with excitation ranging from blue to the far-red. Our results demonstrate the versatility of these new dyes in cells, tissues and animals.

The century-old fluoresceins and rhodamines persist as flexible scaffolds for fluorescent and fluorogenic compounds. Extensive exploration of these xanthene dyes has yielded general structure–activity relationships where the development of new probes is limited only by imagination and organic chemistry. In particular, replacement of the xanthene oxygen with silicon has resulted in new red-shifted Si-fluoresceins and Si-rhodamines, whose high brightness and photostability enable advanced imaging experiments. Nevertheless, efforts to tune the chemical and spectral properties of these dyes have been hindered by difficult synthetic routes. Here, we report a general strategy for the efficient preparation of Si-fluoresceins and Si-rhodamines from readily synthesized bis(2-bromophenyl)silane intermediates. These dibromides undergo metal/bromide exchange to give bis-aryllithium or bis(aryl Grignard) intermediates, which can then add to anhydride or ester electrophiles to afford a variety of Si-xanthenes. This strategy enabled efficient (3–5 step) syntheses of known and novel Si-fluoresceins, Si-rhodamines, and related dye structures. In particular, we discovered that previously inaccessible tetrafluorination of the bottom aryl ring of the Si-rhodamines resulted in dyes with improved visible absorbance in solution, and a convenient derivatization through fluoride-thiol substitution. This modular, divergent synthetic method will expand the palette of accessible xanthenoid dyes across the visible spectrum, thereby pushing further the frontiers of biological imaging.

Small molecule fluorophores are important tools for advanced imaging experiments. The development of self-labeling protein tags such as the HaloTag and SNAP-tag has expanded the utility of chemical dyes in live-cell microscopy. We recently described a general method for improving the brightness and photostability of small, cell-permeable fluorophores, resulting in the novel azetidine-containing "Janelia Fluor" (JF) dyes. Here, we refine and extend the utility of the JF dyes by synthesizing photoactivatable derivatives that are compatible with live cell labeling strategies. These compounds retain the superior brightness of the JF dyes once activated, but their facile photoactivation also enables improved single-particle tracking and localization microscopy experiments.