What was once thought to be a done-and-dusted map of the fruit fly brain has gotten a second look, and researchers have discovered that it’s actually not done at all.

Two teams of scientists at the Janelia Research Campus have independently mapped a brain region critical for memory and learning in the fruit fly, Drosophila melanogaster, in the larval and adult life stages. Their findings have added some unexpected neural connections, or synapses, to a seemingly solved circuit.

The results underscore the need for deeply detailed brain mapping, and make a case for using high-resolution electron microscopy (EM) to do it, says Albert Cardona, a group leader and neurobiologist at Janelia. Even in the most well-studied parts of the fly brain, he says, there’s still a lot more for scientists to see.

Cardona and colleagues, and Janelia’s FlyEM Project team and collaborators, recently published two separate studies: one in Nature on August 10, 2017, the other in eLife on July 18, 2017, detailing the newly discovered neural connections and how they might relate to behavior.

“This region of the brain had been picked over for decades, and people had already described the major circuits,” says Gerry Rubin, Janelia’s executive director. “The models had everything all neat and tidy; these papers say, ‘Well, not so quick.’ ”

Scientists have studied the neural underpinnings of fly learning and memory for more than 40 years, and mapped the brain region involved using light microscopy. That technique doesn’t capture the neural nitty-gritty in quite the same way that electron microscopy does, Rubin says. EM is more time-intensive but can offer much more imaging detail.

Rubin likens the current state of EM in connectomics, the mapping of synapses in the brain, to the early days of human genome sequencing. Rubin, a pioneer of gene sequencing in Drosophila during his tenure as an HHMI investigator at the University of California, Berkeley, recalls that some scientists initially shied away from sequencing. They cited the deluge of information and deep detail as a burden, not a boon, he says. Now a similar dispute permeates the connectomics field: Is electron microscopy worth the additional effort? Or can scientists continue to rely on tried-and-true light microscopy?

Now, given Cardona and FlyEM’s new studies, the teams say that EM should be included as a key aspect of understanding the fly brain.

Both teams’ papers are part of larger efforts to map the whole Drosophila nervous system – Cardona and collaborators in larvae, the FlyEM Project's team in adult flies. The studies employed two different EM methods: transmission electron microscopy (TEM) in the larvae and focused-ion beam scanning electron microscopy (FIB-SEM) in the adult, and specialized software that helps make sense of the immense tangle of neurons. Both studies targeted the mushroom body, the area of the brain responsible for associative learning (like associating a bell’s ring with a tasty treat – think Pavlov’s dog).

The mushroom body consists of multiple compartments, three of which make up the “alpha lobe” in the adult. FlyEM zeroed in on this region, mapping a total of 983 neurons. Cardona’s approach differed slightly. Neurons in the larva’s nervous system are smaller compared to the adult fly, so he was able to trace all 300 neurons of the larval mushroom bodies. 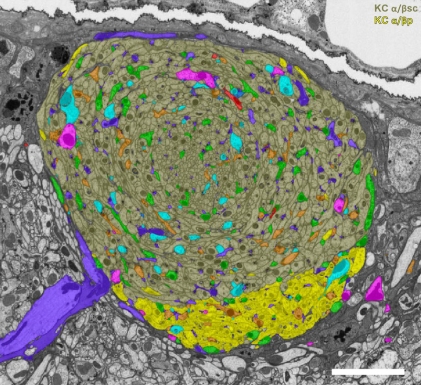 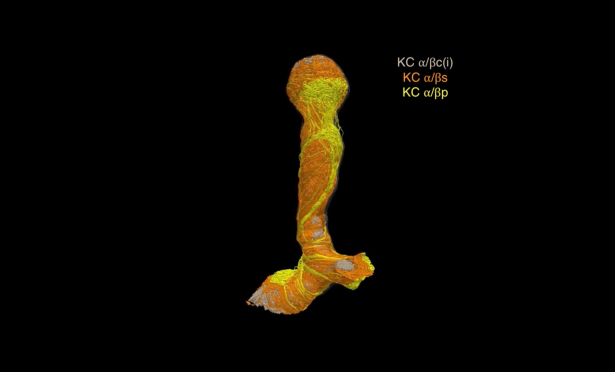 A projection neuron (in blue) makes contact with Kenyon cells (indicated by stars) in the mushroom body of larval flies.

Three types of Kenyon cells (shown in this reconstruction) stretch throughout the mushroom body in the adult fly brain. 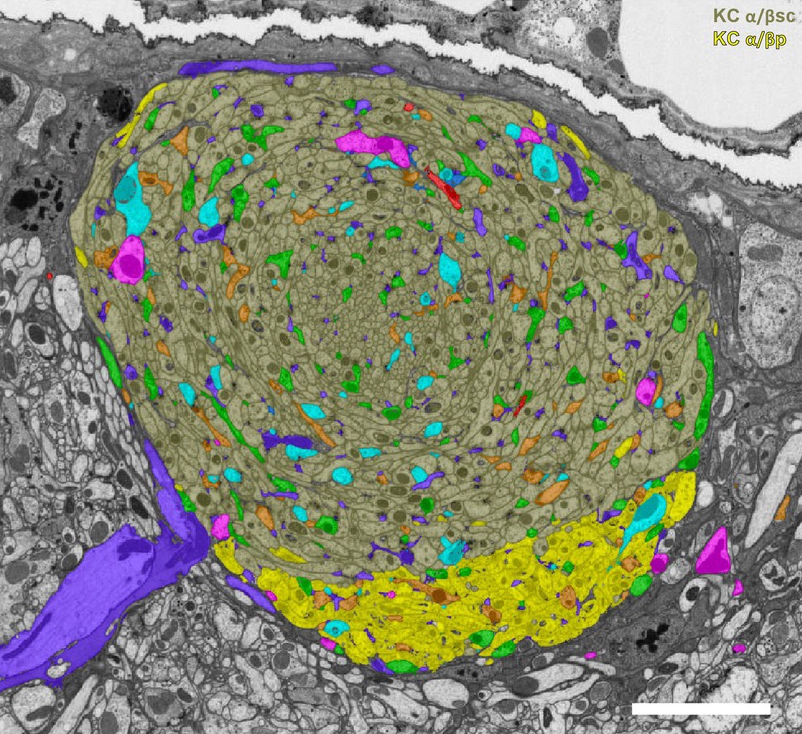 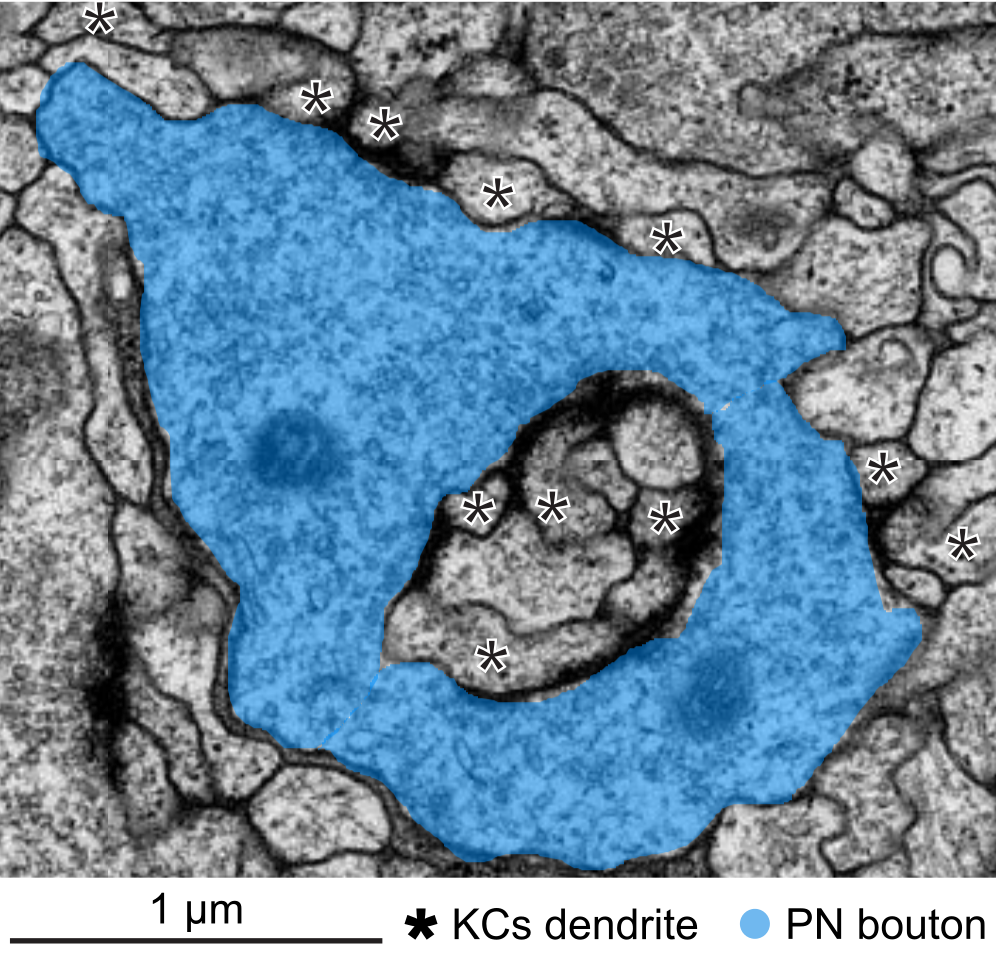 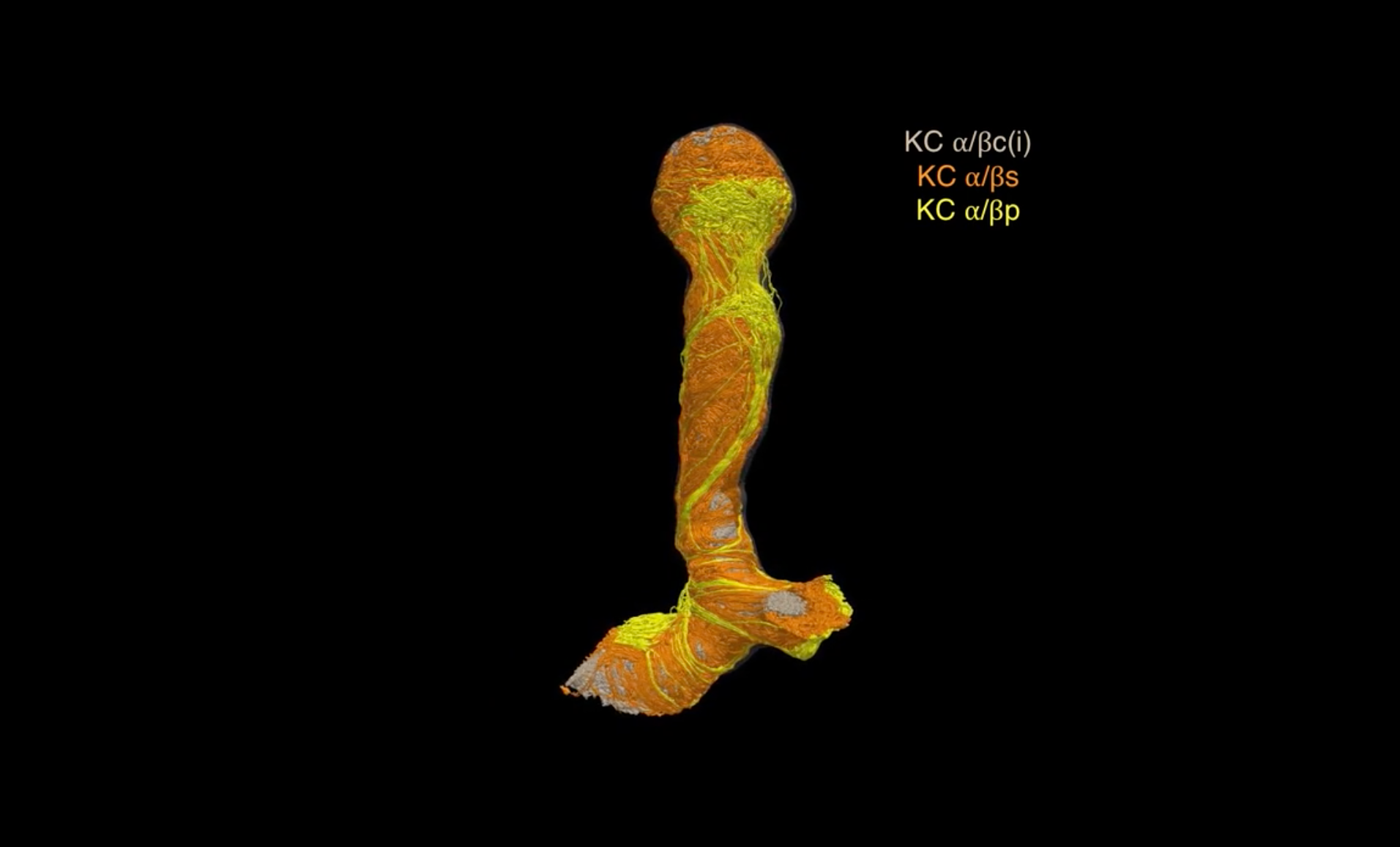 The fact that these synapses were seen in young and full-grown flies implies that the connections are a critical part of the learning and memory circuit, Rubin says.

“When we saw them in the larva, we weren’t sure if it was just a developmental artifact – if they would go away, like the neuron version of baby teeth,” he says. Janelia’s FlyEM team confirmed the neurons’ existence in adults, and study coauthors, Yoshi Aso, Toshi Hige, and Glenn Turner, showed that the synapses contributed to the function of the mushroom body.

Now, the teams are continuing to map the fly and larva nervous systems in full. FlyEM, with 10-fold more neurons to chart, is taking advantage of a boost from the software side – applying the latest machine vision and artificial intelligence methods in collaboration with Google, as well as computer algorithms and software developed in-house at Janelia. With the new advances, Steve Plaza, who manages the FlyEM team, speculates that the 18 months it took to complete this study could now be done 10 times faster.

“I’m really excited about the progress in this field,” Rubin says. “If you would have asked me a year ago how long it would take to map the whole fly brain, I would have said, ‘Thirty years, and I’d be lucky to see it.’ Now, I’d say more like five years,” he says. “I think the field is really about to take off.”