Aljoscha Nern has extensively characterized the neuronal populations in the optic lobes by light microscopy, making extensive use of the MCFO method (Nern et al. 2015). Using the Split-GAL4 intersectional method he has made driver lines specific for about half of the approximately 200 optic lobe cell types. In collaboration with the Reiser Lab (Tuthill et al. 2013 and 2014; Strother et al. 2014) and the Borst lab (Schnell et al. 2012; Maisek et al. 2013), the physiological and behavioral properties of cells involved in motion vision are being explored. We are also working closing with the FlyEM group to establish the correspondence between cell types observed by light and electron microscopy as part of an effort to provide the tools needed for precise manipulation of nodes within the connectome (see Takemura et al. 2013). 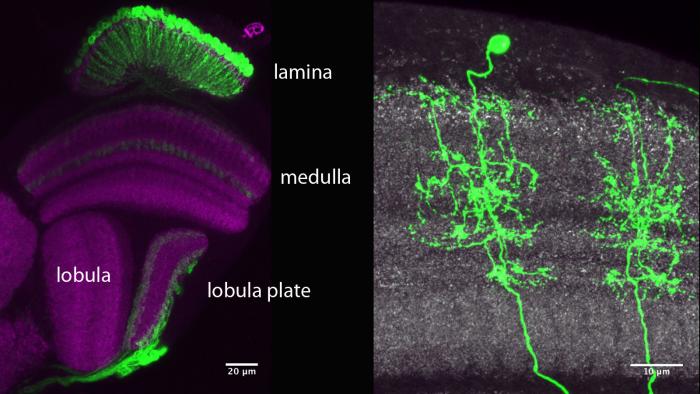 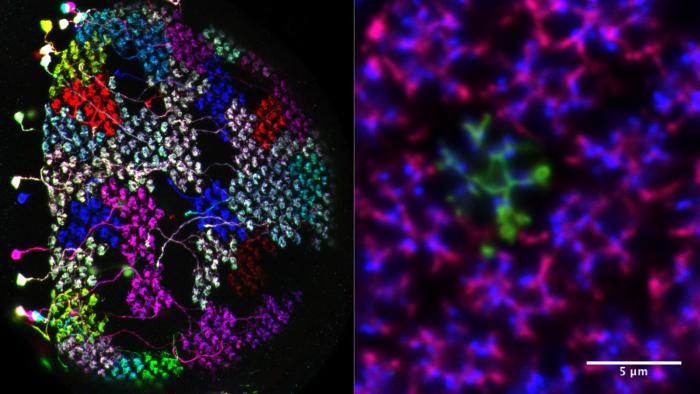 (Above) Multicolor stochastic labeling reveals relative arrangements of neurons.  Tiling of processes of a type of local interneuron in the medulla. Individual cells span multiple columns but do not overlap with each other. Potential synaptic contacts. A high-resolution view of visual columns (in the lamina called “cartridges”) in the lamina. Dendritic processes of L2 neurons (red, with a single cell labeled in green using the flip-out method.) are closely associated with presynaptic sites (blue, anti-nc82 staining).

Ming Wu and Aljoscha Nern are making a concerted effort to understand one of the populations of visual projection neurons (VPNs), the lobula columnar neurons (LC neurons). Retinotopic information is largely maintained in the lamina, medulla and proximal layers of the lobula and lobula plate. The LC neurons, however, convey visual information with little if any retinotopic content, from the lobula to the central brain. The LC neurons and other VPNs are thought to convey salient information about the visual world.  That information is then used to guide appropriate actions. As such these neurons represent a convergence point in the flow of visual information. What information do they convey? How do the upstream circuits of the optic lobes calculate that information? How does the brain interpret these outputs to drive behavior? Working with others at Janelia, we are interested in answering these questions.

About 25 distinct types of LC neurons connect the lobula to the optic glomeruli; some of these were previously described (Otsuna and Ito 2006), but our studies uncovered many new cell types. A superposition of the morphologies of the LCs can be seen in the upper panel of the image shown below, where individual cell types are differently colored. In the lower image, one LC cell-type in one brain hemisphere is illustrated; all the cells of that type are shown in the left panel and two differently colored individual cells in the right panel. 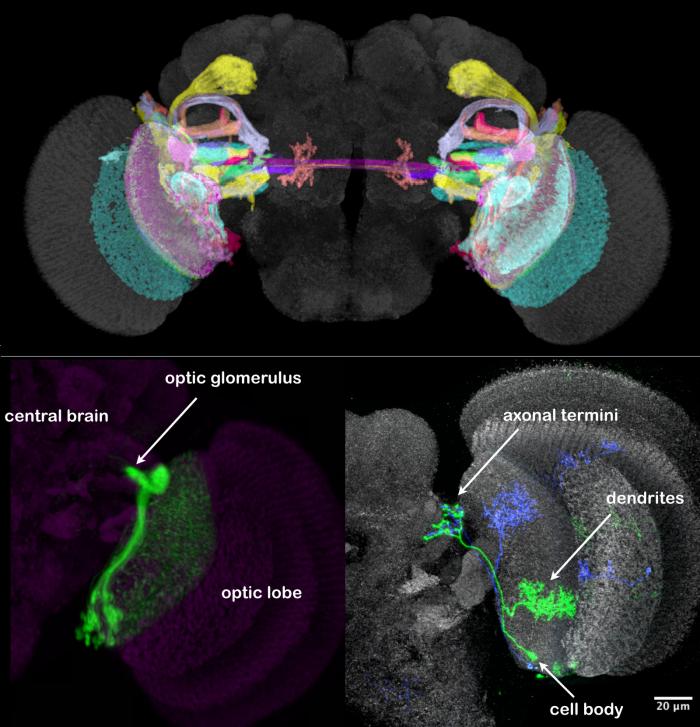 We have made split-GAL4 lines that are specific for nearly all of these cell types (see image below for examples for 12 cell types) and are using them in behavioral studies. We discovered that optogenetic activation of individual LC types can trigger distinct, stereotyped behaviors (Wu et al., in preparation), supporting the long-standing speculation that individual LC cell types convey different salient visual features. 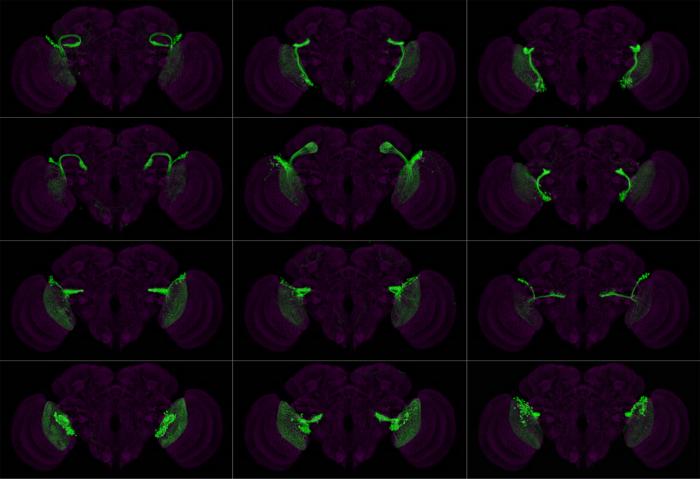