The Applied Physics Group is spearheading an international effort to enable large-scale brain recordings through the development of active electronic probes having several hundred sites per shank. This 3-year project brings Janelia together with the Allen Brain Institute, the Wellcome Trust and the Gatsby Foundation, the latter two with project funding and funded work at University College London and Cambridge University. This project launched in May 2013 and the first test probes were delivered in Fall 2014. These devices are designed to test shank electronics options with 128 channels of analog readout.  Later in 2015 a fully digital probe with 384 channels and both on-probe amplification and multiplexing will be tested.  While the current analog devices are preliminary, they have already demonstrated transformational recording capability.

Current test probes have up to 900 sites with switches under each site to select which 128 sites will be read out.  Fifty micron wide, 20 micron thick, single shank probes with 12 x12 um sites on 20 um vertical spacing and 28 um lateral separations, with an average impedance of ~130kΩ, are shown below.  Test probes with 384 channels, 976 sites and fully integrated amplifier/multiplexer electronics will be tested beginning August 2015. The objective of the project is to make probes commercially available to all users during 2017.  The analog probe currently under test perform as well as any available Si probe to date but the much higher site density and channel count will enable applications not previously approachable. A preferred probe performance test within APIG is to transit CA1 hippocampus in anesthetized rat, at each of 100 probe positions, 15 um apart.  Two-three minutes of activity from all 128 channels is recorded at each position.  A plot of that activity is shown below. (Click on the image to see the detail.) 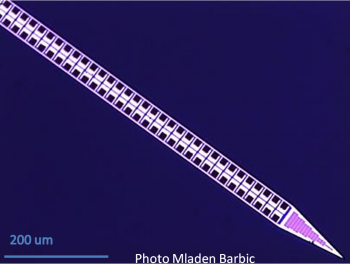 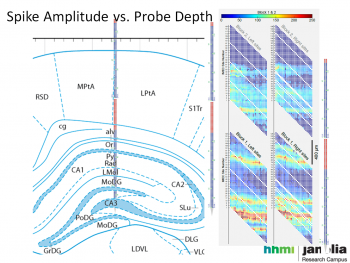 (Left) The distal ~800 um of a 900-site Neuropixels probe with 5 groups of 180 switch-selectable sites. Probe length is 10 mm with 9 mm of site coverage. (Right) Spike amplitude vs descending probe position in an anesthetized rat, beginning with distal sites just above CA1. Recording from 128 sites in lower group for 120 seconds, followed by 128 sites of the next lowest group.

One of our goals is to provide neuroscientists at Janelia with the ability to measure electrical properties of active neural circuits in model animal systems. We have fabricated and deployed custom Si and polyimide electrodes as well as recording systems for Drosophila, dragonflies, zebrafish, mice and rats. The Neuropixels project is a long term effort to make a generic probe.  We have also generated a variety of more conventional Si probes. The Janelia probe project aimed to create maximum recording sites per shank, compatible with chronic stability in mice and rats.  For passive probes, interconnect complexity is the most difficult barrier to chronic probes, thus the integration of amplifier/multiplexers for Neuropixels probes.  To manage we first developed multiplexing head stages using an INTAN Technologies chip modified to our needs, and fabricated a variety of Si probe geometries with our engineering partner Scientific and Biomedical Microsystems.  The recording system, called Whisper, has 192 channel capacity and is described below.  Our probes are made at the NIST Center for Nanoscale Science and Technology Nanofab, with a simplified design optimized for rodent rather than human applications.  During 2015 we expect to complete this project with the deployment of 64 site shanks less than 15 um thick and less than 75 um wide as well as a 2 shank probe with ~50 um shank width. We have also revived the deposition of PEDOT as a site impedance reduction strategy.  Published long ago (Cui and Martin 2003, Ludwig and Kipke 2011) the very low impedance (<50 kΩ for 100 um2 sites) has allowed us to fabricate high performance probes for drosophila and zebra fish larva. Shown below, these probe have shanks as narrow as 3 um, can be made with shank < 2 um thick and record with high signal to noise.

The Janelia Whisper recording system was designed and build at Janelia in the Applied Physic group.  The goal of this work was to create a cost-effective, modular, high channel count recording system, which could be used with in-house Janelia or high site count commercial silicon probes to make both chronic and acute extracellular recordings from the brains of awake and behaving animals. In typical headstage systems, an increase in channel count leads to a proportional increase in the number of wires required to cable the headstage to the data acquisition instrumentation. A large cable will significantly hinder the performance of an animal during an experiment. In order to solve this problem, a headstage with on-board multiplexing was designed to reduce the number of cable wires. The JFRC WHISPER recording system utilizes the Intan Technologies RHA2132 which is a fully integrated 32 channel biopotential amplifier chip, with an on-chip 32-to-1 multiplexer. This chip provides AC coupling, with a high pass pole at 0.1Hz, a low pass pole at 10kHz, and an overall gain of 200. Up to six of these chips can be connected to the system to obtain 192 channels of neural signal amplification. Two addition unity gain 32-to-1 multiplexers are used to record auxillary inputs for both analog and digital trigger signals, allowing the user 256 channels of recorded data. The address of each multiplexer is controlled by a simple microcontroller, the PIC18LF45K50 from Microchip, whose clock is set by a 48MHz oscillator.  This microcontroller also provides a trigger clock to a 16-bit National Instruments data acquisition card, USB-6366, to control when data is sampled, at a 20833 Hz per channel rate. A block diagram of the system is show in Figure 1. SpikeGL, an open-source data logging software platform, displays the data and saves it to disk. 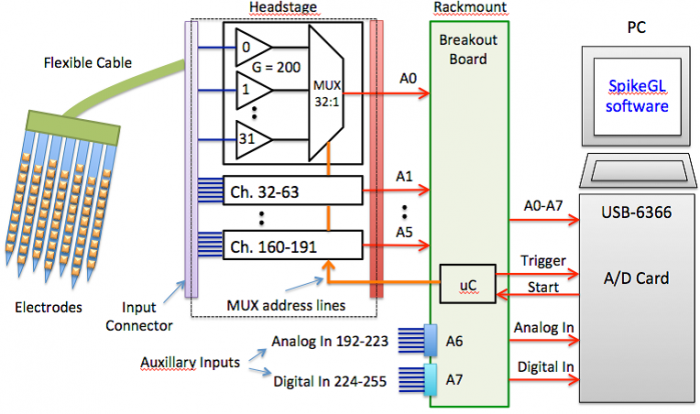 The Janelia WHISPER recording system consists of the following components: 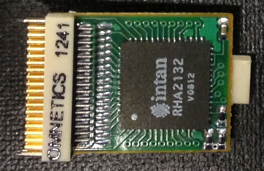 32 Channel Chronic (above) and 64 Channel Acute (below) Headstages: