The increasing application of optogenetics to understand neural circuits and connections has driven interest in tools to deliver light to local areas of the brain, in already-established electrophysiology setups.  Katie Bittner and Jeff Magee of the Magee Lab proposed incorporating an optical fiber into their field electrode pipette, as part of Katie's work to understand the inputs to hippocampal place cells in behaving mice.  We developed etched fibers and methods to incorporate these into standard glass pipettes, shown below.  These have been used to monitor field voltage while inhibiting Arch-labeled inputs to targeted pyramidal cells.  In the course of this work we developed a useful technology for determining the light intensity and light distribution from a source deep in vivo.  Light intensity in a behaving animal is generally not characterized in vivo, where the tissue scattering and absorption properties can differ from those found in slices, where light transmission measurements are performed. 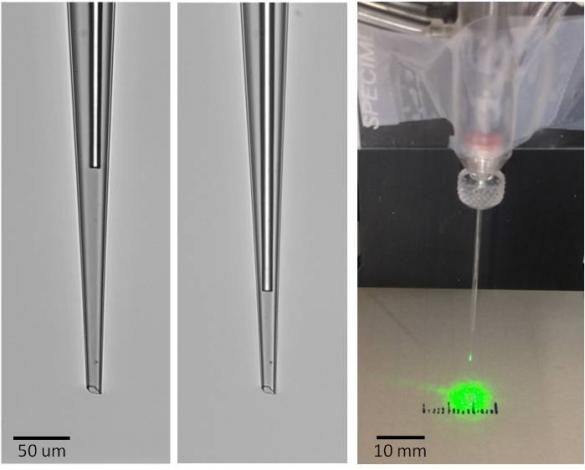 Another optrode technology we adapted for use at Janelia was developed by Yoan LeChasseur and colleagues described here. This device is designed to deliver light and collect fluorescence using a monolithic fiber electrode consisting of graded-index glass for guiding light, and a hollow bore for enclosing the electrolyte solution for electrophysiology measurements. The tip is typically 10 microns in diameter, comprising 6 microns of light guide and a 1-micron diameter electrode opening.  The small tip opening creates 10-20 MΩ resistance when filled with 1-3 M NaCl. The device was successfully used deep in vivo for locating fluorescently-labeled cells within 10 microns, and recording extracellular voltage with an average SNR of 8.  One interest here at Janelia in such a device is for juxtacellular recordings on fluorescently-labeled cells.  We adapted this optrode (available from Doric Lenses) to the electrode holder design shown below, providing coupling to an external optical fiber, and a port for pressure necessary to keep the tip clear upon insertion, and vacuum for achieving cell attachment.

(Left) Schematic of optrode tip, from LeChasseur, et. al. (2011), and (Right) electrode holder for coupling to an external fiber and vacuum port.

Our initial opportunity to help develop optrode devices came from Sébastien Royer, a former post-doc in the Magee Lab, who needed to attach etched optical fibers onto multi-shank silicon probes in order to activate opsin channels in genetically encoded neurons.  His interest was in putting etched fibers on the back of the 15-um thick silicon shanks.  To do this, we first used laser milling to create a 12 um deep channel in the silicon shank, and then used chemically-assisted focused ion beam milling to finely polish the silicon grooves at the very end of the shanks. The etched optical fibers were embedded and glued into the grooves using uv-curing epoxy, enabling the device to produce the extracellular recordings shown below. 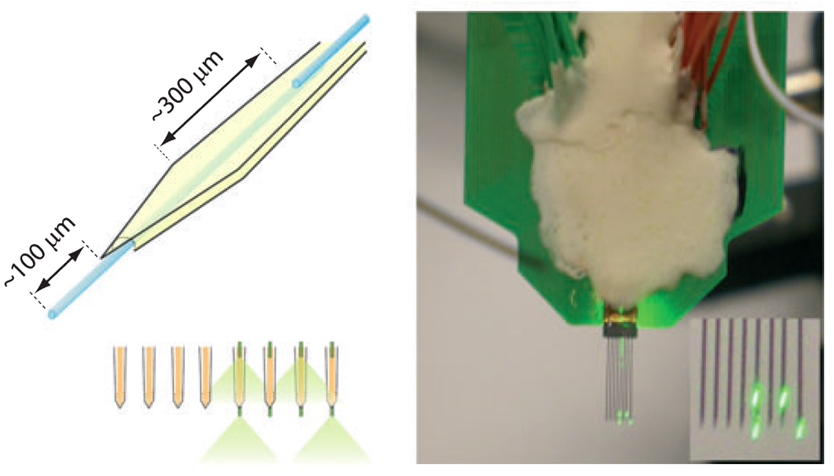 (Upper left) Multi-shank Si probe with retracted optical fibers (in blue) on front surface, and protruding fibers on the back surface, in order to deliver light above and below recording sites near the tip of the shank (upper right).  Lower image shows extracellular recordings from a multishank silicon probe with optical stimulation from one fiber on a shank.  Adapted from S. Royer, et. al., (2009).

We now routinely etch and polish single-mode and multimode optical fibers in order to tailor the light output to the optogenetics application, and attach these to silicon probes for several labs across Janelia.  We've additionally developed techniques for coupling fibers to small red or blue laser diodes, and compactly mounting these on animal head stages in order to minimize the tethers needed for light delivery to, and recording from, freely moving animals.