We investigate the nonlinear properties of proteins and dyes using a scanning multiphoton microscope to study bleaching and spectral properties of fluorophores in cells or tissue, or a non-scanned 2-photon microscope for spectroscopy and fluorescence correlation spectroscopy (FCS) measurements on purified proteins or dyes in buffer solution.  In both setups, laser excitation comes from a Ti:sapphire laser or an OPO, covering the range from 700 nm to 1600 nm.  We use various detectors to obtain 2-photon-excited emission spectra, 2p excitation spectra, and fluorescence lifetimes.  We use FCS measurements to determine fluorophore concentration, 2-photon brightness, diffusion coefficients, and photoswitching or photobleaching times.

The GCaMP calcium sensor has been a focus of the Looger Lab and the GENIE Project, and improvements over the last several years has moved these indicators past the best dye-based indicators, enabling detection of single action potentials and imaging the activity of a field of individual dendritic spines. More recently, these groups have pursued red calcium indicators to better match the transmission window of tissue, and to enable two-color calcium imaging. Below we plot the 1-photon and 2-photon spectra of GCaMP6 and RCaMP1 sensors, showing there is good spectral separation of the emission while there is useful overlap of the 2-photon absorption in the 980 - 1010 nm range.  This overlap may allow exciting both colors with a single laser wavelength, at the cost of sub-optimal excitation of either indicator.

Linear optical properties (left) and two-photon action cross sections (right) for GCaMP6f and RCaMP1h, where action spectra are determined by comparison to the reference dye fluorescein and published cross section data of Xu and Webb.

Imaging in tissue at increasing depth is limited by light scattering, which  arises from refractive index variation over multiple length scales. Tissue scattering is a subject of great practical interest, and is being addressed at Janelia by the Ji and Cui Labs who investigate methods to control the phase and amplitude of excitation or emission light of a fluorescent label to offset the effects of scattering.  Another approach to reducing scattering is through use of longer-wavelength dyes and fluorescent proteins,  pursued by the Lavis Lab and the GENIE project, as light scattering decreases in brain tissue as approximately 1/lambda1.6.  Chris Xu of Cornell University has pioneered the use of longer wavelengths for multiphoton microscopy to increase imaging depth, following his earlier work with Watt Webb quantifying two-, three- and four-photon microscopy.

We are investigating three-photon microscopy of GCaMP6.  Shown below is the fluorescence excitation spectra of GCaMP6f following 3-photon absorption, in the presence and absence of calcium.  We find the Ca-dependent contrast DF/F is 32 at 1320 nm, a value similar to that found in 1-photon and 2-photon measurements. We also plot the absorption coefficient of water to roughly indicate the transmission window of tissue.  The 3-photon-excitation peak of GCaMP6 at 1320 nm occurs below the onset wavelength of significant losses due to water absorption. So GCaMP6 is a favorable candidate for longer-wavelength excitation.

Three-photon action spectra of GCaMP6f, and the absorption coefficient of water (H2O data from Kou, et. al. Appl. Opt. 32, 3531 (1993)). The measurements here were not limited by water absorption as we used thin samples of GCaMP6 in buffer, separated from the objective by a coverslip and D20 immersion fluid, which has > 50-fold lower absorption than water in this spectral range.

Three-photon excitation of GCaMP6 should increase the imaging depth, but it is unclear if the cost will be higher rates of photobleaching, since the laser intensity is > 20-fold higher than in 2-photon measurements, although at longer wavelength.   Below shows typical bleaching curves for Ca-saturated GCaMP6f observed in a scanning multiphoton microscope for approximately the same signal level, with excitation of 4.4 mW at 1000 nm (2p excitation) and 100 mW at 1300 nm (3p excitation).  From this and similar measurements, three-photon excitation shows a 2-3 fold higher bleaching rate than 2-photon excitation. Whether this is a limiting effect in vivo remains an open question.  With the recent availability of tunable femtosecond lasers operating in the 1300 nm range, 3-photon imaging of GCaMP6 will likely be pursued in animals to determine the tradeoffs in SNR versus deleterious effects arising from the use of higher laser power. 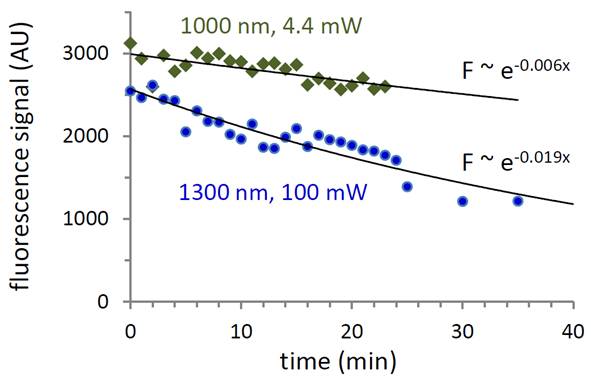 We have investigated the 2-photon peak brightness spectra of a number of fluorophores and calcium indicators, described here.  FCS is a useful method to assess the maximum fluorescence rate of a fluorophore under two-photon excitation, where increasing signal with laser power is balanced by saturation or photobleaching.  The molecular peak brightness is experimentally the detected maximum count rate per molecule at a given laser wavelength as the laser intensity is varied, and does depend on system parameters such as detector QE and filters, but enables a comparison of fluorophores under 2-photon imaging conditions which is not otherwise easily determined. In the figure below, we show the peak brightness spectra for GECI and dye-based calcium indicators. 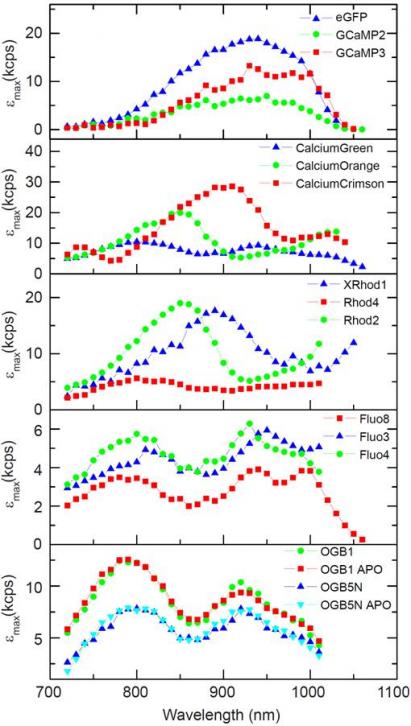