Researchers strive to make measurements on animals in a way that does not inhibit or modify the behavior under study. Anthony Leonardo here at Janelia is investigating the neural basis for prey capture by dragonflies in flight, a behavior requiring untethered and unrestricted motion of the animal. He and colleagues Reid Harrison and Rob Olberg developed and demonstrated a lightweight telemetry circuit powered by a small battery that when combined with custom silicon probes designed by Anthony and made by APIG, can record and transmit extracellular and neuromuscular signals from the dragonfly to a stationary receiver.  The weight of the circuit, however, is a limiting factor to achieving recordings in flight, and a large factor in the circuit weight is the battery.

In collaboration with Anthony, we explored one approach to providing lightweight and untethered power for the dragonfly electronics using solar cells, which generate a current proportional to the amount of light falling on the active area of the device.  Ambient indoor light is a convenient source of optical power, but weak.  So in order to keep the size of the solar cells small, a near-IR light source that cannot be seen by the dragonfly was utilized to illuminate a body-mounted solar-cell array while the dragonfly perched.  An additional component, a small lightweight supercapacitor, was added to store the light-produced energy required to run the telemetry circuit during the brief period of flight of the dragonfly during prey capture.  This is a rechargeable process; each time the dragonfly returns to the perch it is illuminated with near-IR light, which is converted to electrical power by the solar cell, recharging the supercapacitor for the next flight.

Devices have been constructed and used to successfully record neural activity in perched dragonflies, and experiments are under way to map the complex dynamical behavior and the underlying neural computations involved in midflight prey capture. 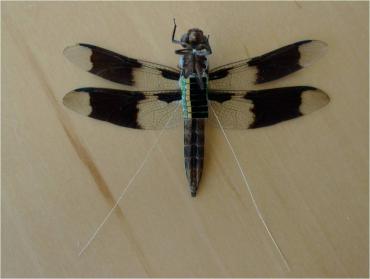 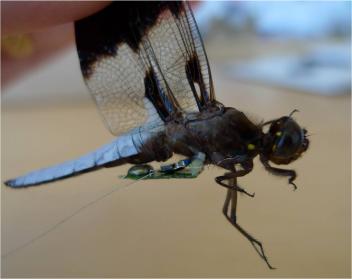 Below and side views of the dragonfly-mounted telemetry circuit.  Images courtesy of Anthony Leonardo.