Of the many challenges to recording intracellular neural activity while imaging deep in tissue, co-locating a neuron and a recording electrode remains a barrier to greater control over an experiment.  One approach is to add fluorescent dye to a pipette, for either directly filling a neuron, or for loading dye into surrounding tissue to accomplish shadow patching, highlighting a cell or pipette by either positive or negative contrast. The impetus for our efforts came from Daniel Huber of the Svoboda Lab: why isn't there a fluorescent glass for visualizing patch pipettes that won't interfere with the gigaohm seal between cell membrane and glass inner surface, necessary for high-quality recordings.

Our initial approach was in collaboration with Bertalan Andrásfalvy, a post-doc in the Magee Lab and now with the Institute of Experimental Medicine, Hungarian Academy of Sciences. After pulling a batch of 10-12 pipettes, we use a benchtop vacuum sputterer to deposit sub-monolayer gold onto the glass pipette outer surface, then sputter silicon dioxide to protect the gold particles (actually gold nanoclusters of size 2 nm) and restore the surface to glass.  A batch of 12 pipettes is typically  processed in a sputtering run at the same time.  The gold nanoclusters exhibit broad luminescence peaked at 550 nm under 2-photon excitation (700 - 1000 nm excitation), and exhibit minor photobleaching for excitation power below 10 mW.

Image taken in slice of a dye-filled pipette (red) after filling a neuron, and a Au-nanocluster-labeled patch pipette (yellow).  Image courtesy of Pierre Apostolides / Magee Lab.

This coating method preserves the inside glass surface of the pipette, allowing gigaohm seals with membranes when used for intracellular recordings. For example, images below show a Au-labeled pipette patching a GFP-labeled interneuron under 2-photon scanning with 10 mW of 920 nm laser excitation.  After giga-seal formation and break into the cell for a whole-cell operating mode, intracellular I-V recording of the neuron in current clamp recording mode is demonstrated.  We also tested for possible thermal effects of scanning two-photon illumination on intracellular potential measurements, by pushing up the laser power and reducing the scanning area. There are small thermal effects on intracellular potential at higher (~20 mW) laser illumination power when only a short line was repeatedly scanned at the gold-coated electrode tip during the first few hundred ms of the recording. Using 2-3X optical zoom during the linescan measurement, small (~0.1 mV) temporary depolarization artifacts can be detected due to higher sampling.  This artificially high laser power excitation on a small area of the tip is not a normal operating protocol, and was only used to explore the operating range and limits of these devices.

2-photon imaging of gold-nanocluster-coated pipettes during patching of hippocampal neurons in an acute brain slice containing GFP- and DsRed-labeled interneurons. 2-photon z-projection image stack obtained in the green channel (A), red channel (B), and merged red and green channels (C). 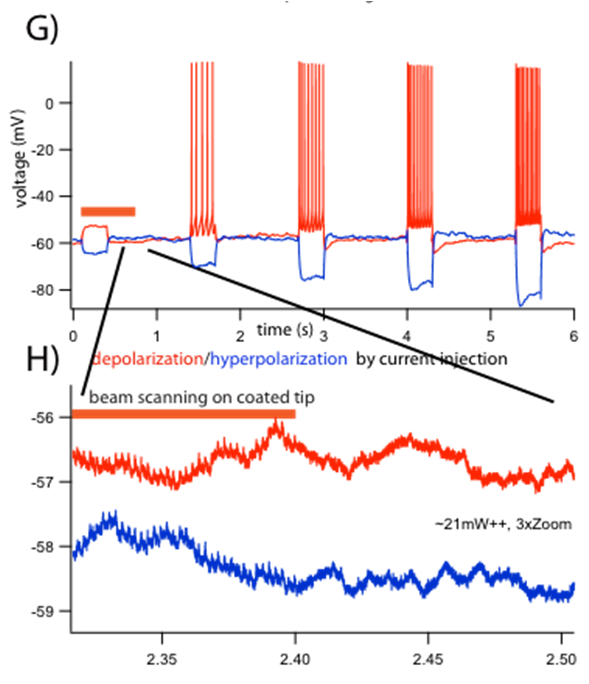 Not every ephys lab has access to a benchtop sputterer.  So a second approach to labeling patch pipettes was advocated by Bertalan in collaboration with Igor Medintz and colleagues at the Navel Research Laboratory, Daniel Huber and Gregorio Galiñanes at the University of Geneva, and APIG.  Using simple wet bench techniques, green, yellow, or red fluorescent quantum dots could be robustly deposited onto pulled glass pipettes.  Quantum dots have unusually large 1-photon and 2-photon cross sections and high quantum yields, and are much brighter than any other fluorescent label. Deposition of quantum dots onto the glass pipette is accomplished through repeated dipping of the pipette (under back pressure) in an organic solvent containing the quantum dots, followed by air drying.  The procedure preserves the inner glass surface for gigaohm sealing to a cell membrane, while the adhesion of the quantum dots to the outer surface allows insertion through the dura with minor loss of label.  The procedure, characterization, and in vivo use is reported here.