The process of synaptic integration can be broken down further. First, excitatory and inhibitory inputs to the dendrites are integrated in a process called “dendritic integration”. As a result of this process, current arrives at the soma and axon initial segment, where it is integrated further to determine whether an action potential fires or not. 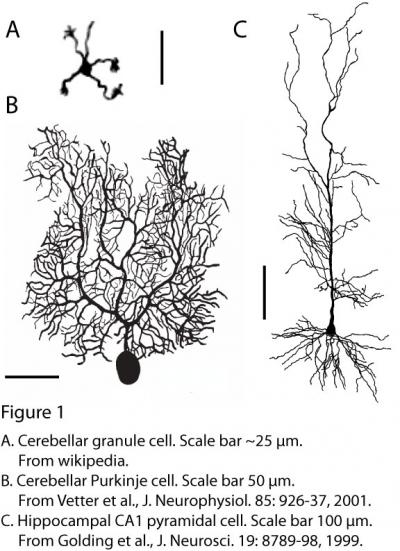 The simplest cells in the brain are almost certainly cerebellar granule cells (they also happen to be the most numerous). Each of these neurons has just a few small dendrites, each ending in a claw that usually receives a single excitatory synaptic input (Fig. 1A). The dendrites are so small, and therefore close to the soma and axon, that the process of dendritic integration can hardly be considered separately from somato-axonal integration.

A reduced view of synaptic integration is that neurons operate as simple integrative units that respond to the linear weighted sum of excitatory and inhibitory inputs, spiking only when net excitation exceeds a defined threshold. In reality, however, neurons are much more complex and diverse. They respond to synaptic inputs, indeed, by either spiking or not spiking, but the mechanisms that determine how they respond to their inputs are anything but simple.

A mechanistic understanding of the function of neural circuits will require not only that we know the connections between neurons in the circuit, but also that we understand the function of each of the various types of neurons in the circuit. This difficult task will require intensive study of a variety of neurons. A shortcut to studying every type of neuron in functional detail may be to establish relationships between neuronal structure, gene expression, and functional properties. The ultimate goal is to understand the computations that circuits perform and how the structural and functional properties of the neurons and their interconnections enable these computations, thus producing sophisticated cognition and behavior.

In my lab, we have spent almost 20 years studying pyramidal neurons in the CA1 and subiculum, the two major output structures of the hippocampus. These neurons are indeed complex, as described in the page on “Principles of dendritic integration in CA1 pyramidal neurons” (see the menu on the right side of this page).

Currently, we are pursuing a few projects related to dendritic integration. Ching-Lung Hsu is using dendritic recording to study the mechanisms responsible for the fascinating discovery (made by Albert Lee’s lab at Janelia) that CA1 pyramidal neurons integrate spatially tuned synaptic inputs in a manner that is steeply voltage dependent. Erik Bloss is using array tomography to study the spatial pattern of inhibitory inputs provided by various types of interneurons specifically targeting the dendritic trees of CA1 pyramidal neurons. Each of these projects is described in more detail on subsequent pages (see right-side menu). In addition, together with Mike Tadross, Julia Bachman is beginning a project with the aim of developing new methods for analyzing expression patterns of channels and receptors in pyramidal neuron dendrites. We also have a nascent collaboration with Haining Zhong and Caiying Guo on this latter project.

Also see the gallery at the bottom of this page. 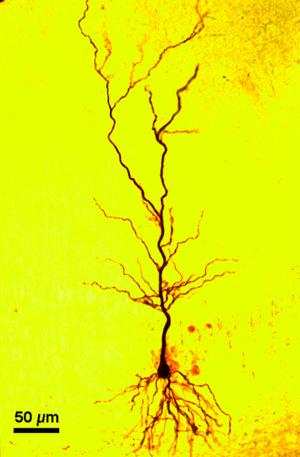 "Information processing in dendrites and spines"