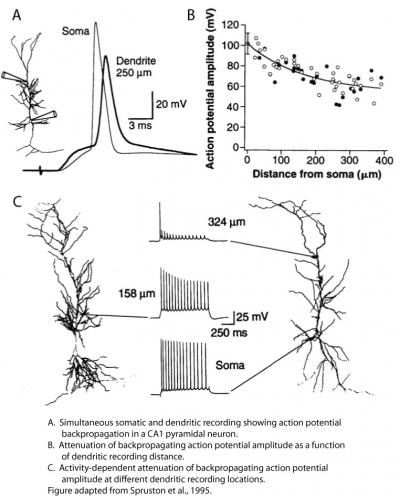 As a postdoc in Bert Sakmann’s lab in Heidelberg, I performed the first simultaneous somatic and dendritic patch-clamp recordings from CA1 pyramidal neurons in rat hippocampal slices. Although there was a long history of prior studies addressing the excitability of CA1 dendrites (i.e., the degree to which they express voltage-gated channels that allow spikes to be generated in dendrites and/or propagate along them; see Johnston and Narayanan, 2008, as well as the Discussion in Golding and Spruston, 1998), dendritic patch-clamp recordings provided the most direct look at CA1 dendritic excitability at that time. That work provided definitive evidence that CA1 dendrites contain voltage-gated sodium and potassium channels (see also Magee and Johnston, 1995). My colleagues and I showed that synaptic input to CA1 dendrites resulted in action potential initiation near the soma (later shown to be in the axon), followed by active backpropagation of the action potential into the dendrites (Spruston et al., 1995). The backpropagating action potential (bAP) was shown to attenuate with distance along the primary apical dendrite, and calcium-imaging experiments suggested that bAPs sometimes failed to propagate beyond branch points in the dendrites. These results were consistent with the notion that CA1 dendrites are only weakly excitable, and hence the bAP propagates actively, but not regeneratively (see Glossary on the right side). Furthermore, the attenuation of bAPs was more pronounced during repetitive firing, resulting in attenuation of dendritically recorded bAPs during trains of action potentials (Spruston et al., 1995). In my lab at Northwestern, we later identified the properties of dendritic voltage-gated sodium channels that were responsible for this activity-dependent attenuation of bAPs (Jung et al., 1997).

Another important discovery was made by my postdoc, Nace Golding, working in my lab at Northwestern. Again using simultaneous somatic and dendritic patch-clamp recordings, we found that when synaptic stimulation was sufficiently strong, fast spikes (i.e., presumed to be mediated by Nav channels) could be recorded in dendrites either prior to the somatically recorded action potential or in some cases in the absence of the somatic action potential (Golding and Spruston, 1998). 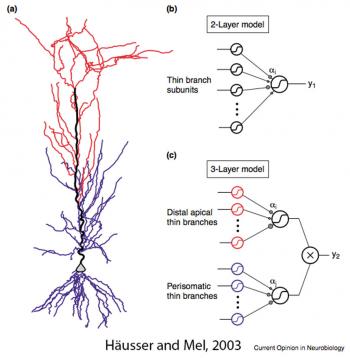 Later, Atilla Losonczy and Jeff Magee confirmed and extended these findings using dendritic recordings and two-photon uncaging of glutamate (Losonczy and Magee, 2006). These results are consistent with the notion that CA1 dendrites can generated spikes mediated by Nav channels, but these dendritically initiated spikes (Na-dSpikes) do not propagate reliably from the dendrites toward the soma, and thus they do not always trigger an action potential in the soma.  As a result of this failure of active propagation of Na-dSpikes, spikelets are often recorded in CA1 dendrites. This has contributed to the growing view in the field that pyramidal neurons may function as multi-layer integration devices, with individual branches acting as integrate-and-fire units at one level and the axon acting as a second level integrator of inputs from multiple branches (Häusser and Mel, 2003).

Because our interpretation of these results required some inferences, we developed computational models of CA1 pyramidal neurons. The first goal was to determine if our inferences were consistent with the growing set of data on the properties of CA1 dendrites. Using somatic and dendritic recordings, we measured voltage attenuation between the two recording locations and filled the neurons with biocytin so they could be subsequently stained and reconstructed. (Note: in collaboration with Dezhe Jin, we are currently developing methods for improving the speed and accuracy of neuronal reconstructions). These reconstructions, along with the data recorded in the same cells, as well as data from other work, were used to generate models that can be used for two purposes: 1) to confirm the plausibility of our interpretation of a collection of results, and 2) to make predictions that can be tested with further experiments.

The models, developed in collaboration with Bill Kath, were used to perform simulations that offer insight into how synaptic inputs are integrated in the dendrites of CA1 pyramidal neurons. The most salient points are illustrated in the presentation below.

Certainly, some aspects of these models are not perfect (e.g. action potential threshold is rather low), as is always the case with models. In addition, our models to date contain simplifications, such as the absence of voltage-gated calcium (Cav) channels. Nevertheless, models don’t have to be perfect to be instructive. Despite the simplicity of our models (that is, they are not as complex as they could be), they have allowed us to make experimentally testable predictions that ultimately led to new insight.

One prediction was that spikes generated in the apical tuft, which do not propagate to the soma for the same reasons illustrated in the video for more apical oblique branches, could propagate more effectively to the soma and axon if paired with synaptic depolarization of more proximal apical branches. This prediction was tested and confirmed experimentally, leading to the hypothesis that CA1 dendrites may operate as coincidence detectors of synaptic input from the enthorhinal cortex, which contacts on the apical tuft branches) and CA3, which contacts more proximal apical branches (Jarsky et al., 2005).

Another prediction was that placing large synapses near the ends of dendrites—as would be needed to compensate for their longer distance from the axon and therefore greater electrotonic attenuation—would result in very small numbers of synapses triggering dendritic spikes, because of the high input impedance at the end of dendrites.

We thought this would be unlikely, so we tested this prediction and indeed found no evidence for larger synapses near the end of dendritic branches (Katz et al., 2009). This work highlighted the importance of understanding the distribution of synapses in the dendrites precisely, which motivated (in part) our current array tomography studies.

What is the function of dendritic spikes?

Another important function of dSpikes is the induction of synaptic plasticity, such as long-term potentiation (LTP). For instance, we have shown that dSpikes alone can provide the postsynaptic depolarization necessary for the induction of LTP at both Schaffer collateral and perforant path synapses onto CA1 dendrites (Golding et al., 2002; Remy and Spruston, 2007).  Though the relative contributions of Na-, Ca-, and NMDA-dSpikes to LTP induction remains uncertain, we have shown the dSpikes are more powerful triggers of LTP than bAPs (Hardie et al., 2010). This controversial view of LTP has been presented in two review articles (Lisman and Spruston, 2005, 2010). No doubt, more data will emerge that will help to clarify the relative contributions of bAPs and dSpikes to the induction of LTP at the many types of synapses and various conditions in the brain during which synaptic plasticity occurs.

The picture of dendritic integration presented on this page, however, still remains incomplete. For example, the recent observation made by Albert Lee’s lab, that CA1 pyramidal neuron responses are strongly voltage dependent in vivo (Lee et al. 2012), may involve a dendritic mechanism, but it cannot be fully explained by the simple models presented here. Thus, we are doing further experiments involving synaptic stimulation, glutamate uncaging, dendritic imaging and recording in vitro, to explore the possible mechanisms of this voltage dependence of dendritic integration.

We are also continuing our collaboration with Bill Kath. His postdoc, Aushra Abouzeid, is using taking advantage of our new data to generate models with additional features. For example, the addition of Cav channels and NMDA receptor channels should facilitate modeling other kinds of dendritic spikes as well as synaptic plasticity. Incorporating models of prolonged inactivation of Nav channels (Menon et al. 2009) will also facilitate simulations of sustained activity, which is known to affect both backpropagating action potentials and dendritically initiated spikes.

Spread of current (and hence voltage) in the dendrites without the assistance of voltage-gated channels. Passive propagation always results in voltage attenuation.

The degree to which dendrites contain voltage-gated channels capable of generating spikes and/or supporting their active propagation.

An action potential that is initiated in the axon and propagates actively into the dendrites.

An voltage change with a large dV/dt (and typically a large second derivative as well) and a large amplitude.

A small spike, typically resulting from passive propagation of a spike generated at a distance from the recording location.

A spike that is initiated in the dendrites.

A dSpike supported primarily by voltage-gated sodium channels. This is the briefest type of dSpike.

A dSpike supported primarily by voltage-gated calcium channels. Typically larger and broader than a Na-dSpike.

A dSpike supported primarily by NMDA receptor channels. Typically similar to a Ca-dSpike. Importantly, however, NMDA-dSpikes (aka NMDA spikes) cannot propagate actively beyond dendritic compartments where NMDA receptors are activated by glutamate.

A long lasting dendritic depolarization (>50 ms), typically interpreted as resulting from a Ca-dSpike or NMDA-dSpike.

Also see the gallery at the bottom of the Dendritic Integration page. 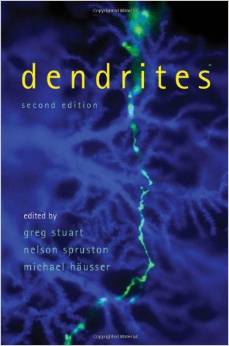