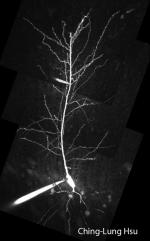 Using somatic and dendritic recordings from CA1 pyramidal neurons in slices, Ching-Lung Hsu has begun to explore the cellular mechanisms that could be responsible for this effect. We have successfully reproduced the steep voltage dependence of synaptic responses in slices and are now investigating the types of ion channels responsible.